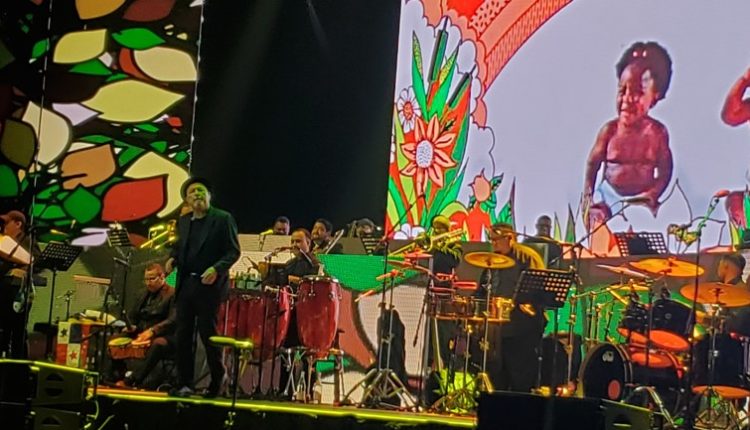 No other word describes the Rubén Blades SalsaSwing concert in Puerto Rico but extraordinary.

The SalsaSwing Puerto Rico concert included a 3-song tribute to Cheo Feliciano, the entire “Siembra” album from top to bottom, a total of 41 songs performed, and a total duration of 5 hours on stage.

I thought Rubén’s 2019 50th Anniversary concert in Puerto Rico was a one-time 4-hour event due to the occasion. So this time around I wasn’t expecting another 4-hour concert.

I also found out that previous SalsaSwing tour concerts in other locations were about 3-hour long. For example, in Chicago, it was 2 hours and 40 minutes with 22 songs performed (a good concert by any standard).

But Rubén Blades considers Puerto Rico his 2nd musical home. Not only has Puerto Rico supported his songs since his early days in music, but many Puerto Ricans have influenced his musical career, starting with Ismael Rivera and Cortijo, to Richie Ray and Bobby Cruz (the first artists to record one of his songs), to his idol Cheo Feliciano, and songwriter Tite Curet Alonso.

So Rubén once again went beyond the ordinary to give us a 5-hour gem concert. I don’t know of any other artist that has even come close to a 4-hour on-stage performance, much less a 5-hour concert. And yes, he does talk between songs (I enjoy his song stories just as much as the music…more on that later), but as he says, the talking wouldn’t take from the music time. Rubén ended up playing 41 songs (according to a local newspaper….or 45 according to his own count). That’s a lot of songs in any league!!!

After opening with “Caminando” and his salute to the audience, Rubén Blades went into a 3-song tribute to one of his musical idols, our beloved Puerto Rican salsa idol Cheo Feliciano. The songs were from Cheo’s time with Joe Cuba.

By now I shouldn’t continue to be amazed by the great sound quality of Roberto Delgado’s orchestra, but their reproduction of the Joe Cuba sound was nothing short of impressive. It was like an improved Joe Cuba sound, with perfect recording studio quality.

Here’s a short clip of Rubén’s introduction to the segment.

Some time into the concert, I estimate that Rubén must have played at least some 15 songs by that point, he announced they were going to play the entire music of the 1978 “Siembra” album from top to bottom, in the order of the original recording. This, as he said, would be the 1st time ever that the album would be played live entirely.

This is the first time in any concert of any kind that I’ve seen (that I either attended in-person, saw it on DVD, or watched it on YouTube) where a band plays a whole album live from beginning to end, and even in the same order as in the original recording.

Each song was introduced with a comment or anecdote from Rubén. For example, for “Buscando Guayaba“, he explained that “la vereda del 8 y el 2” was the street where Paula C. lived (82nd Street).

And for “Pedro Navaja” he explained how he sought the arranger and how people told him the song wouldn’t be played on the radio because it was too long. That led to the song’s start with the conga beat and a flugelhorn that we could hear playing the melody from the back of the stage.

It turns out that the person playing the flugelhorn was the song’s arranger and invited guest, the great Puerto Rican trumpeter Luis “Perico” Ortiz, who continued to improvise in a back-and-forth with Rubén as he sang pieces of the song’s intro before the chorus. It was a mesmerizing moment that brought the crowd to its feet. For me, it was one if not the best moment of the concert of the many great ones we had during the long evening.

Rubén Blades continued adding great anecdotes and comments in-between songs. As I learned from his previous “50th Anniversary” concert, I would start recording with my cell phone after the end of the songs, so I could capture these anecdotes. You’ve been able to see a sample of these in the two videos I shared above.

If you read my blog on “Ruben Blades 50th Anniversary Concert“, then I don’t have much more to add regarding Roberto Delgado’s orchestra.

One noteworthy mention was Rubén’s comment about remembering the previous timbalero, the late Puerto Rican Carlos Perez-Bidó. The new timbalero, I must say, is at least equally talented…and added a funny touch as whenever someone in the band took a solo, Rubén would step back between the conga player and the timbalero, and the latter would lead the three of them in a side-to-side synchronized “dance”, that was both simple and gracious.

The Panamanian bassist Roberto Delgado’s band is simply the best band in the business. Period! They can play anything impeccably well. I noticed this time around that they coordinate less with hand gestures and more through their internal audio system. Roberto seemed to mark the start of songs, the “mambo’s”, and the end, through the audio system as he rarely relied on hand signals. Besides the band was all spread out through the concert stage, as there are a lot of musicians in the big band. It almost seemed as if half of “El Chorrillo” was on stage.

The band sounded better than Willie Colón, Joe Cuba, and even the Fania All-Stars, with CD quality sound.

SalsaSwing was The Best Concert

I couldn’t see how Rubén Blades could match the great concert he performed in 2019 for his 50th Anniversary in music. But SalsaSwing went way beyond it.

In this unique 5-hour concert, Rubén Blades and the Roberto Delgado orchestra delivered 41 songs, played the “Siembra” album entirely, and added numerous anecdotes about the songs Rubén has recorded throughout his career.

Besides all of what I’ve mentioned above, this concert had a better stage than the previous one. The scenes in the background big screen were reflective of the song being played. And the covers in front of the musicians would also change to match the stage scene.

In summary, SalsaSwing was a truly enjoyable concert, and from the comments, I heard of the people walking out after the concert, most felt they got their money’s worth, and then some!