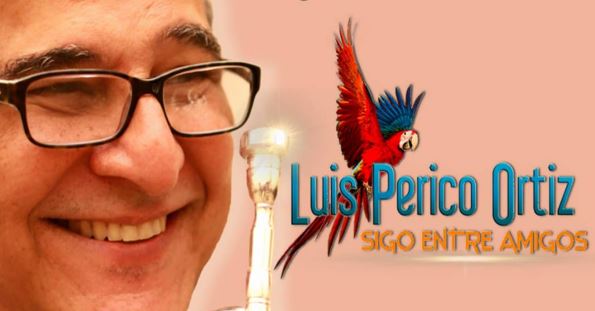 “Sigo Entre Amigos” feels like a friend that after several years of not seeing each other, drops by with his friends to share the latest music they’ve put together.

We first got a visit from Luis “Perico” Ortiz and his friends in 1983 with the album “Entre Amigos“. For that initial concept album, the maestro still had his orchestra with which he performed regularly. For that first concept album, he invited Ruben Blades, Rafael Ithier (alone), Conjunto Quisqueya, and of course, his band singer Roberto Lugo. José Nogueras wrote two songs for the album, sung by Ruben Blades.

I feel very proud with what we did in this production, because even though it took some time, the result gives me great satisfaction.

We had to wait 30 years to get another visit from Luis “Perico” Ortiz and his friends. The wait was worth it, as the great trumpeter, songwriter, producer and occasional singer took the concept from “Entre Amigos” to another level. If the first album was good, “Tiempo de Amar” was outstanding by any measure.

By 2013 the maestro didn’t have a regular band, and therefore the album was performed by “Luis ‘Perico’ Ortiz and Friends”. So even though “Tiempo de Amar” didn’t have the “Entre Amigos” name tag, I consider it a similar concept. But this time, instead of featuring one artist in each song (except for the title song), “Perico” combined two or three artists in most songs. This brought a whole new dimension to the album. He also expanded the concept from just Salsa and Latin Jazz, to include a Danza, a Folk song, a Symphonic, and a semi-Classical song. His friends were numerous and luminaries in their own right.

Note: here’s a link to the full review of “Tiempo de Amar“, with audio clips from my interview with the maestro.

Eight years later, we get another visit by “Perico” and his friends. In “Sigo Entre Amigos“, the maestro Luis “Perico” Ortiz moves closer to the initial concept album by performing just Salsa and Latin Jazz, and mostly featuring one artist per song (again, except for the title song).

Once again we welcome the musical visit of Luis “Perico” Ortiz, who reminds us he is still among friends; thus “Sigo Entre Amigos“. And the friends he brings along this time around are also top-notch. They include Tony Vega, Millie Quezada, Johnny Rivera, Gerardo Rivas, Henry Santiago, Yturvides Vilchez (trumpet), Nestor Torres (flute), Charlie Sepuveda (trumpet), and Antonio Luis Orta (sax).

Two of the nine songs are great Latin Jazz pieces. The rest are for the delight of Salsa fans. Luis “Perico” Ortiz wrote most of the songs. And again, as in the two previous musical visits, the song themes have mostly positive messages. There’s a tribute song to Latin music Big 3, Machito, Tito Puente, and Tito Rodriguez. There’s another song tribute to the New York City dancehalls. And “Perico” sings a song expressing his gratefulness to his fans, and he has many across Latin America, for all these years of continued support for his music and projects.

Curious notes: After all these years, “Perico” keeps adding “adivina quien te canta” (guess who’s singing) when he sings in a recording. I remember he said the same thing back when he sang in his very first solo album “Super Salsa”. Also, the title of the song “Como Decirte Que No, Si Si” used to be a chorus he added as a second or third chorus to one of his songs when her performed it live, but I can’t remember which one (I think it was “El Bohemio”).

Like in the previous two recordings, the quality of the music is Perico-level. The arrangements, the melody, the sound, all is top-class in “Sigo Entre Amigos“. The good taste in the music is evident. From the medley of songs intertwined in the Latin Jazz pieces, to the Salsa music with more than one chorus and more than one “mambo”. There are the trombones for the big sound and Perico’s trumpet highlighting the brass section. Oh, and before I forget, the guy in the congas does a phenomenal job! Keep an ear open for his tumbao.

There was one friend that I missed in this musical visit. Although Domingo Quiñonez had been involved in the early stages of the project, he did not appear on the final version of the album. I wonder if he got lost on the way!

We can only wish that we get more regular musical visits from Luis “Perico” Ortiz and his friends. I always welcome them at our home because we always enjoy the great quality music they bring along. I’m already looking forward to their next visit.

“Sigo Entre Amigos” is another quality musical production from Luis “Perico” Ortiz that will delight Salsa fans. There’s a lot more to be said about this album, but what remains to be done is for you to check it out.

And if you would like a signed copy of the CD, here’s a video by the maestro explaining how you can get one.

Café with Antonio Sanchez: on Birdman, new Albums, and the…