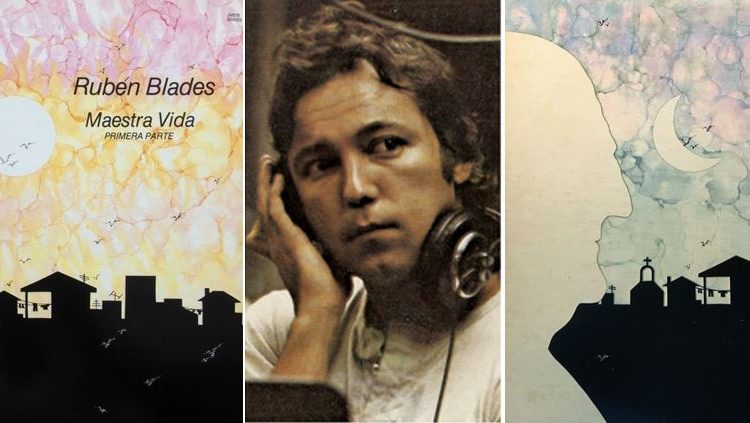 It’s been 40 years since Ruben Blades released the masterpiece “Maestra Vida“, a double-album describing the life of its protagonist in a Latino neighborhood.

This was an audacious groundbreaking recording of a musical “novela“, similar to previous musical stories, but much more elaborate.

What I mean by “musical novela” is the telling of a story throughout various songs. Some call it an “opera”, but I disagree with using that term.

“Hommy” centers around the birth and life of a child born blind, who feels and loves the vibration of the music, particularly the drums. He grows up to become a great “rumbero“.

“La Raza Latina” is about the story of the evolution of Salsa music. Ruben Blades participated in this one singing one song.

“Maestra Vida” centers around the life of Carmelo DaSilva, from courtship of his future wife Manuela, to the birth of his son Ramiro, all the way to old age of Manuela and death of Carmelo.

What sets apart “Maestra Vida” from “Hommy” and “La Raza Latina” is the depth to which Ruben Blades develops the story, including the secondary characters and the scene.

“Hommy” is all about the child protagonist. Its well-known that Harlow took The Who’s “Tommy” and converted it to Salsa music. The main topic of the story been identical, and the even the name is extremely similar. However, although there are secondary characters that help tell the story, they all talk about Hommy and not about them. The father, the doctor, the “Gracia Divina“, the “Heladero“, the godfather….all sing about Hommy, but we know little about them.

In “Maestra Vida” we not only get to know Carmelo, but also get to know Manuela, Ramiro, and even bar owner Vava Quiñonez. Throughout the story, we get to know them and also get familiar with the scene. We know about the streets, about the poverty of the neighborhood, like when his son Ramiro is born, he Carmelo sings…

..or even of the general frustration with politics in “Dejenme Reir“, where he sings…

Some songs are strong and lively, others more subtle. But at the end of the day, “Maestra Vida” is a masterpiece if you take the time to go through its two albums.