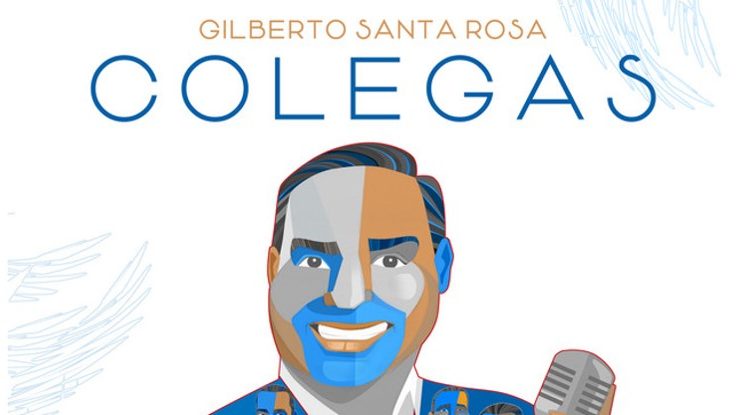 This lengthy album was recorded over a period of two years, and like a well-aged wine (or rum, or whiskey), it contains great Salsa with taste, elegance, and flavor.

The Salsa in “Colegas” is plenty and thick. The album has 19 songs (no, it’s not a typo) and a duration of 1 hour 45 minutes. That’s 105 minutes compared, for example, to the double-album of “Maestra Vida” (which I just recently wrote about) which has about 84 minutes of music. That’s the advantage of today’s streaming digital music vs. the old LP format.

The album is named for its theme, as Gilbertito sings 16 of the 19 songs in duets with Salsa colleagues. What I like the most about these duets, as opposed to what he did ten years ago in “Irrepetible“, is that the majority of them are not superstars, with a few exceptions.

Another nice detail is that Gilberto Santa Rosa sings and plays the bongo, including a bongo solo, in “Sonerito“.

Finally, I loved the song selection! Mostly covers of old Salsa songs, but again, most of these are not the classic old super hits. I like that he shines a new light on these (now) dimmer Salsa songs.

The sound in “Colegas” is superb. Now that we have that settled, I’ll focus instead on two other aspects; the musicians and the arrangements.

The musicians, as in all Santa Rosa albums, are first class. Jan Duclerc on trumpet, Jimmy Morales on congas, and Reinaldo Jorge on trombone are just the top of the list. Cuban great timbalero Orestes Vilato makes a rare guest appearance. Vilato’s bandmate during his time with Ray Barretto and Tipica 73, Johnny “Dandy” Rodriguez, also makes a guest appearance.

What I like about the arrangements is that they are aggressive and original. Take “Ban Ban Quere” for example. Most of us have engrained in our brains the song included in “Barretto“, sang by Ruben Blades. But in “Colegas“, you wouldn’t be able to tell it’s that song just from the introduction. The same happens with most of the covers here.

The song selection, the different and aggressive Salsa arrangements, the great musicians, the guest singers, and the vast amount of music (19 songs) makes this album a gem!

Gilberto Santa Rosa is still at the top of his game here, and clearly enjoyed every minute of making this recording with his colleagues.