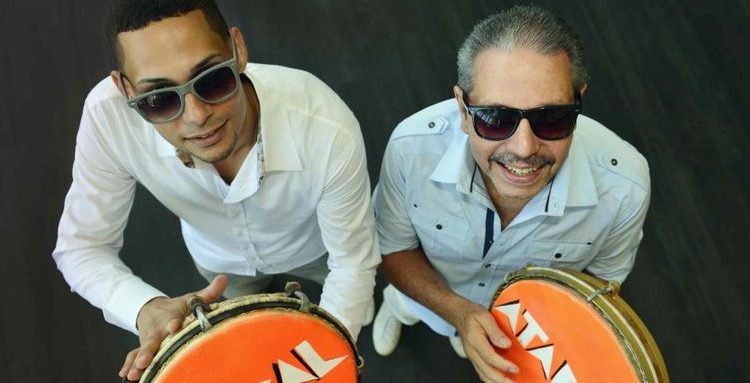 For this Father’s Day Special we honor two great father-son musicians in Hector (Atabal) Rodriguez and his son Caymmi Rodriguez.

This father-son team has been playing side by side in the group Atabal for about 10 years now. Atabal is a Puerto Rican band that focuses in the use of Bomba and Plena, although they can play just about anything. When Atabal was founded in the early 80’s, they played folk music from Latin America, not just from Puerto Rico.

Before Caymmi entered the group, he had to earn his stripes. “He wasn’t just going to come in the group because he’s the son of the director”, Hector told me in an conversation we had a couple of years ago.

Caymmi did just that by first becoming part of the folk groups of Ramon Pedraza and then the one directed by Modesto Cepeda, of the famous Cepeda Family. With these groups, he learned how to sing Bomba and Plena in the traditional way, and how to play these rhythms.

With that knowledge, Caymmi joined his father in Atabal. He became the lead singer and has since become the lead for Atabal. Caymmi has brought a the more contemporary sound and lyrics that his dad was looking for.

This father-son collaboration not only has given the band a new life, but has also maintained one foot in the roots of the folk music that brought it to life nearly 37 years ago.

Racism in Latin Music and MLK