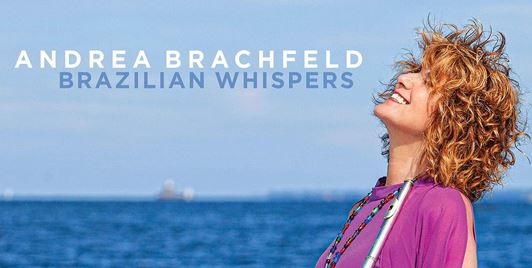 An album mostly of Tom Jobim covers, which manages to be refreshingly original.

"Brazilian Whispers" is a well-crafted album, featuring the excellent songs of Brazilian music legend Antonio Carlos Jobim in a performance so original that they hardly seem the covers.

“Brazilian Whispers” is the result of fan request for Andrea Brachfeld to play more Brazilian music. Her thorough research resulted in an album true to the music while conserving her signature style.

Once Andrea decided to release an album of Brazilian jazz, she did a thorough research of the country’s music. In particular, she focused on the music of Antonio Carlos Jobim.

I always liked Brazilian music, but I knew that I would need to really put in the time to study it in an authentic way if I wanted to really play it right.

“Brazilian Whispers” contains a mix of popular as well as lesser known standards penned by the “father of Bossa Nova”. Andrea says “…basically I listened to a lot of Jobim songs and the ones that I really liked are the ones that we recorded.”

Andrea Brachfeld and her Insight Quartet were able to keep the original essence of Jobim’s songs, while giving them their own spin. Because of the research they did, the songs came out something like “original standards”.

They also added three original songs in the Bossa Nova / Samba genres, which blended perfectly with the rest of the album.

The core of Andrea Brachfeld’s Insight Quartet knows Brazilian music well and performed it flawlessly. Bill O’Connell (piano/fender rhodes), Harview S (bass), and Jason Tiemann (drums) have been playing with Andrea for 3 years and have formed a tight performing unit.

The album also has extensive participation of Lincoln Goines (electric bass) and Chembo Corniel (congas/percussion). Both have worked previously with Andrea and fit her style like a glove.

The other addition to the album is Brazilian percussionist T. Portinho (drums), who is one of the most recognized names in contemporary Brazilian music.

These talented musicians performed like a well-oiled machine to produce music that transports you south to the land of the caipirinha.

“Brazilian Whispers” is a refreshing album of Brazilian music. You get to listen to Jobim’s songs in a brand new way, with the ensemble led by Andrea, a veteran Latin Jazz flutist. This 9th album of Andrea as a bandleader is another quality production. Besides the great musicianship, the sound, mixing that complete album concept is top notch.

Not surprisingly, “Brazilian Whispers” is launched under the Origin Records label, and was co-produced by Andrea with Bill O’Connell.

I think you’ll enjoy the relaxing 11 songs included in this album. It won’t hurt if you have some cachaça to go with the music.