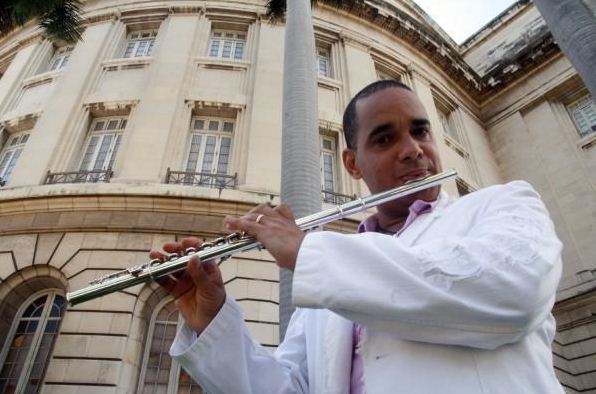 People at Dimitrious’ Jazz Alley in Seattle were sweating during the longest day of the year. The perspiration of musicians and audience was not because of the long sunny day outside, but rather due to the hot Latin music coming from Orlando “Maraca” Valle’s 13-piece band on stage.

A Solstice of Great Latin Music

I completely enjoyed a fabulous evening at the Jazz Alley, with Maraca displaying his incredible talent playing the flute, and his band able to keep up with all his doings. Latin Jazz, Cuban Danzón, Salsa mixed with Timba, and even a Merengue were all equally enjoyed by an enthusiastic audience that only left a few empty seats at the Jazz Alley.

Instead of the evening getting cooler as it progressed, it got hotter, as the set began with a couple of nice and mellow Latin Jazz scores, followed by a Cuban Danzón that was part of the album “Reencuentros” which is Maraca’s latest release, not quite yet out in the market, but Maraca just received a shipment of the 1st batch of this production in time for the Jazz Alley presentation. I’m already enjoying my autographed copy of the CD & DVD set I got at the show.

After the “Danzón”, Maraca started to pick up the tempo, as he began with a fiery Latin Jazz selection, which set the stage for a couple of hot Salsa songs that first got the audience on their feet, and then little by little people started dancing all over. Whoever didn’t dance to these Salsa songs could not have resisted the need to dance to the Cuban great Beny Moré’s classic “Tumba Tumbador”. These songs were followed by other fiery danceable tunes that left the audience asking for more!

During the set, 23-year-old pianist Andy Rubal received some of the loudest applause from the audience as he displayed incredible craftsmanship during several solo opportunities. Equally impressive was the band’s 1st trumpet, Josiel Perez, who could climb to incredible high notes, bringing memories of the master of doing this, the also Cuban trumpet virtuoso Arturo Sandoval. Rafael Valiente did a great job carrying the “tumbao” of the band playing his 4 congas, even though he didn’t get many chances to do solos.

There is no doubt that the ex-member of the iconic Cuban fusion band Irakere is a virtuoso flutist. His solos showcased his incredible ability for improvisation as well as his resourcefulness as Maraca could keep up solos for a long period of time. His band was very enthusiastic, particularly the 5-piece wind section, who kept dancing along to the band music during the parts where they were not playing.

I highly recommend the Orlando “Maraca” Valle show, as it’s a fun performance and has a bit of everything. The cherry on top was grabbing perhaps the 1st CD/DVD of “Reencuentros” as the shipment just arrived from Cuba before the show. This is a masterful album with an all-star cast that I will review here at LatinoMusicCafe.com when it goes out for sale to the general public.

Juan de Marcos: the Cuban Music Archeologist Back in the…