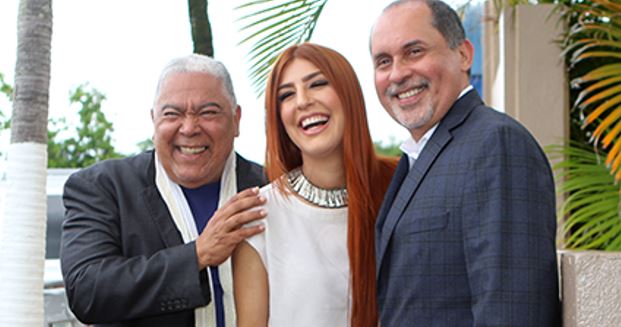 Danny Rivera was a young singing prodigy when he solicited and got a chance to sing with the orchestra of Cesar Concepcion. The Maestro liked so much Danny’s sweet voice, that he decided to keep the youngster from Santurce as a singer.

In the few months that Danny stayed with the great orchestra of the by then veteran maestro, he learned a lot while singing the famous plenas they performed around the many cities and towns of Puerto Rico.

During those bus trips before the bigger highways were built in Puerto Rico, Cesar Concepcion surely shared with the young Danny Rivera his memories of how he started as a young trumpet prodigy with the orchestra of Augusto Rodriguez Amadeo. Concepcion was barely 16 when he began with Don Augusto.

Like the Maestro Concepcion, Humberto Ramirez was also a young trumpet prodigy when he joined the famed orchestra of Willie Rosario as a new graduate from Berkley. He wasn’t as young as Don Cesar or Danny when they started, but was just as enthusiastic about making an impact in the music scene.

In the early 1930s, in the middle of the Great Depression, Don Augusto Rodriguez decided to break his orchestra. From there, bassist and fellow trumpeter Rafael Muñoz decided to form his own band, which would later become the house band for the Escambron Beach Club. Cesar Concepcion decided to play with other bands in Puerto Rico and later moved to New York and Los Angeles.

Cesar Concepcion returned to Puerto Rico in the mid-1940s and formed his big band orchestra which debuted in a San Juan hotel in 1947. That same year, Tito Puente and Tito Rodriguez formed their own bands in New York City, just as the Palladium began programming Latin music on Sundays.

As his orchestra quickly gained popularity, Cesar Concepcion wanted to do something different, which turned out to be a big gamble. He loved Plena, but the rhythm was considered black music and was only played in the streets, house parties, or in 2nd-grade venues. Remember, this is way before the Civil Rights Movement of the ’60s. Concepcion knew that dancers would love plena, but he had to make it more “palatable” for a different audience. So he kept his Afro-Cuban percussion and adapted the rhythm for his big band. Without the panderetas, the plena sounded smoother, albeit still incredibly inciting to dance.

Another thing that the Maestro Concepcion did was to dedicate a plena to each of several cities and towns of Puerto Rico. This turned out to be very popular with audiences in Puerto Rico and especially in New York.

These two innovations brought the plena to the forefront of Puerto Rican music. But they didn’t come without a downside. Cesar Concepcion was criticized by folklorists and purists as they called his style of plena a disgrace to the Puerto Rican musical tradition.

Tribute to the Legacy of Cesar Concepcion

Armed with a magnificent big band and with his customized plenas, the Cesar Concepcion Orchestra was nicknamed by Puerto Rican radio personality Mariano Artau as “the best and most popular orchestra in Puerto Rico“.

It wouldn’t be far-fetched to think of Humberto Ramirez and his big band as today’s version of the Cesar Concepcion Orchestra. Both trumpeters and both bandleaders, they diverge in that Ramirez, after his Salsa beginnings in the “school” of the Willie Rosario Orchestra, focused his career on Latin Jazz. However, it was popular music that got him to music and it still continues close to his heart, as reflected in his recordings of boleros or aguinaldos.

Danny Rivera comes full circle with “Mil Años de Plena“. The time he spent with Cesar Concepcion at the beginning of his career served him as a solid base for his climb to stardom, but didn’t produce a recording. Now, after a long and productive career that still keeps him very active, Danny brings us a tribute to the man that gave him his first shot.

And the cherry on top was the addition of the young singer Karla Marie. The addition of Karla gives this recording a sense of “passing-the-torch” regarding the Cesar Concepcion legacy from the older folks to the younger ones.

Whether you’re an old fan of Cesar Concepcion or new to his music, you’ll love this gem that preserves the legacy of one of our musical legends.