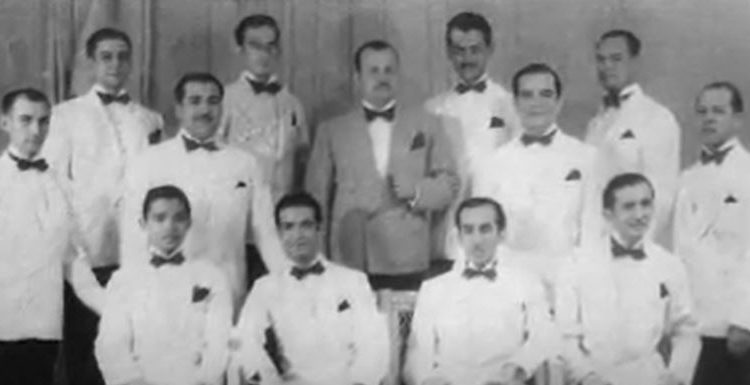 One day in 1934, Rafael Muñoz was playing the bass with his modest band at an event, when two executives approached him with a business proposition. They wanted him to lead the house band of the most popular night club in Puerto Rico.

This month we commemorate the 120th birthday of this versatile musician and extraordinary bandleader.

The 20’s were good for Rafael Muñoz. He learned music from a very early age in Quebradillas, Puerto Rico. By the time he was a teenager he played well the trumpet, the flute, and the bass.

That musical versatility earned him a place in the popular band of Augusto Rodriguez Amadeo at the age of 25. With Rodriguez’ band, he played both the trumpet and the flute. While in the band he was introduced to the bandleader’s daughter Carmen. They fell in love and married 3 years later. One of his bandmates was a prodigious teenage trumpeter by the name of Cesar Concepcion.

Life was good until the Great Depression hit. Augusto’s band workload began to diminish rapidly. Rafael, as everyone else, began to worry on how to make ends meet. His degree on pedagogy from the University of Puerto Rico, which he earned soon after joining the Augusto’s band, would serve him well to get some side jobs.

Rafael Muñoz supplemented his declining income with a job as manager of a movie theater. He knew the business well as his first gig as a musician was playing with a band that also did the live sound for silent movies in theaters. But after that dried out, he then took a job as bus driver.

Finally, in 1932, Augusto Rodriguez decided to disband his orchestra. The news came as Rafael’s wife Carmen had just given birth to their second son. His income continued to decrease while his family grew.

Since bands weren’t hiring, he decided to form his own band. He was able to hire Johnny Rodriguez (the older brother of who would become Latin music legend Tito Rodriguez) as his singer.

Rafael Muñoz assembled a good band, although they only played sporadically. His luck changed when one night in 1934, they happened to be at the right place and at the right time to be spotted by the right guys.

The Rafael Muñoz Orchestra at The Escambron Beach Club

When the Rafael Muñoz Orchestra took over as the main band of the Escambron Beach Club, it couldn’t have been at a more unstable time in Puerto Rico. The Great Depression was in full swing, and consumers were protesting US-appointed Governor Blanton Winship policies. The sugar cane workers went on strike led by lawyer Pedro Albizu Campos, leader of the Nationalist Party.

Rafael Muñoz continued to attract great talent to his band. Among those were singers Jose Luis Monero and Feliz Castrillón, as well as musicians like trumpeter Juancito Torres, and violinist Pablo Elvira Olivero.

To New York and Back

The Rafael Muñoz Orchestra achieved a great level of success during its 8 years at the Escambron Beach Club. During that time, it became one of the most popular bands in Puerto Rico and made numerous recordings.

Suddenly, in 1944, Muñoz decided to leave the orchestra and relocate to New York City citing personal reasons. There, he soon was hired to lead the house band at the La Bamba Club, and later would play his band regularly at the Tropicana Club in the Bronx. During this time, he hired a young pianist by the name of Charlie Palmieri.

After 5 years in the Big Apple, Rafael Muñoz returned to Puerto Rico. He formed a new band, which he named La Orquesta de Ayer, de Hoy, y de Siempre. Hummm, sounds like a Gran Combo album. I wonder if…

With his new band, he returned to the Condado Hotel. Then, as the new medium of television took hold in Puerto Rico during the mid-50’s, Rafael Muñoz and his orchestra were hired as the house band of a TV program.

Rafael Muñoz; The Dictator of Rhythm

In 1959, Rafael Muñoz returned to the hotel scene, this time in the newly constructed Hotel La Concha. There, he alternated with the orchestra of Noro Morales, who had also returned from New York.

Perhaps due to the popularity achieved by the Rafael Muñoz Orchestra during his years at the Escambron Beach Club and beyond, people began calling him “the Dictator of Rhythm and Syncopate”.