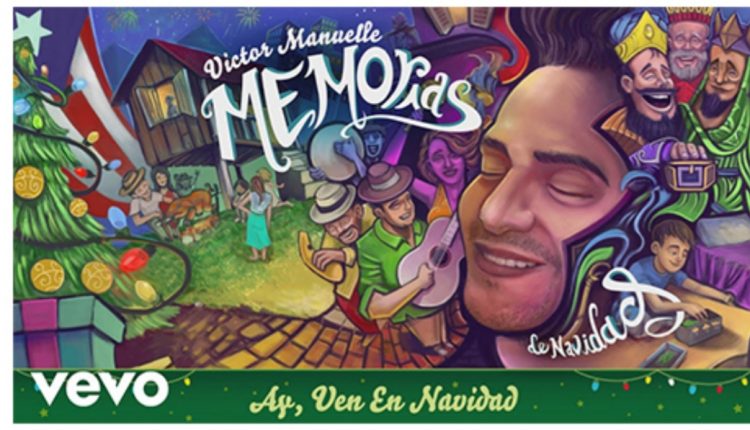 Salsa music icon Victor Manuelle brings us his second Christmas music album with “Memorias de Navidad“. The audio-visual project takes us through a virtual memory-lane of all things important for a good Puerto Rican Christmas.

“Memorias de Navidad” is an audio-visual project with a central Christmas theme and lots of “Salsa Navideña” (Christmas Salsa). In this sense, it is similar to the Banco Popular Christmas specials aired every December.

If the concept of a video with Christmas music is similar to the ones of Banco Popular, the idea and production of “Memorias de Navidad” is totally different.

There’s no string of artists singing. Victor Manuelle takes care of the singing duties with Charlie Aponte being the only guest singer in one song.

The script centers around a grandfather who suffers of an early stage of Alzheimer’s and wants to share his Christmas memories with his family. The grandfather is played by Victor Manuelle, who not too long ago lost his father to the disease, which his grandfather also had.

Victor Manuelle wrote the script, and worked on this project for about two years before its release the Sunday after Thanksgiving. That day, it was transmitted in various local channels in Puerto Rico.

First, the script has a central theme (grandfather’s Christmas memories) which flow throughout the video and bring some cohesiveness to the songs. There are a few exception to this, like the catchy “Parranda en Boogaloo“, which I find hard to link to the central theme, but nonetheless, find it a very done song and video. Really cool!

The second is that the project has well thought video scenes. Victor Manuelle did the script himself, and he really thought well how to portray the concept of the whole video and of each song with it.

..and of course, let’s talk about the music.

The music is “Memorias de Navidad” is great! All songs are originals, with five of the twelve written by Victor Manuelle himself. The very first one, “Ya Se Ven las Bombillas” is one of my favorites as it describes how people begin to bring out their Christmas decorations.

From there it just keeps getting better. “Quiero Parranda” became the promo video for the project. I talked about “Parranda en Boogaloo“, and there is “El Pavochón” with Charlie Aponte. Both bring great music with humorous catchy themes.

“Me Quedé Puyú” is about not being able to do “parrandas” last year (really in 2017) due to the lack of electrical power after Hurricane Maria. Victor Manuelle uses the song to list a string of popular artists and athletes he’ll invite to this year’s “parrandas”. But Salsa artists are not invited, and yet he invited the “Junta Fiscal”, which, as his buddy in the song says…”nobody likes them here”. Check it out. Too funny!

The whole thing culminates with the patriotic “Yo Vivo“, a great homage to Puerto Rico. The video features some of the best scenery of the island.

I really enjoyed “Memorias de Navidad” for the video, the music, and the originality of the whole concept.

Victor Manuelle poured his heart into this project, and it shows in the end result.

As off the writing of this review, “Memorias de Navidad“, just out a couple of weeks ago, is the best-selling album according to Billboard magazine.

“Memorias de Navidad” makes a great Christmas gift. Just make sure the recipient has a DVD player. You can check the audio in your favorite streaming service.