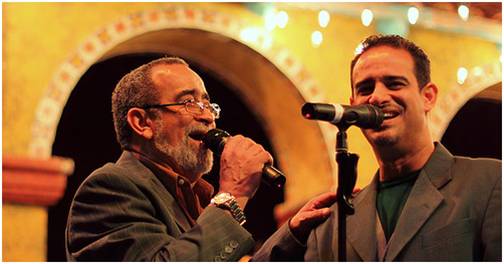 “El Godfather de la Salsa” Andy Montañez is one of the most recognized and beloved Salsa and Latin music singers, as well as a devoted family man.

“El Niño de Trastalleres” has always kept his family, and especially his children, as one of his top values.

The Early Career of Andy Montañez

This is a special year for Andy Montañez as he celebrated his 70th birthday and 50 years of professional career. Unfortunately, he spend his 70th birthday in a hospital bed due to the injuries suffered during a traffic accident while in Colombia.

Note: you can read the first post of the blog series on the history of El Gran Combo HERE.

One of the major turning points in his career occurred in 1976 when he made the difficult decision to leave “El Gran Combo” and Puerto Rico to relocate to Venezuela and join “La Dimension Latina”. “La Dimension Latina” had just lost their main singer Oscar D’Leon. Oscar had some problems in the band, and decided to form his own band, “La Salsa Mayor”.

As Andy left to join “La Dimension Latina” he was heavily criticized for leaving “El Gran Combo”. One of the most popular “tiraera” songs came as a result of this event, when “El Gran Combo” released “Aqui No Ha Pasado Nada” as part of the “En Las Vegas” album (1978).

In 1980, after 4 years with “La Dimension Latina”, Andy Montañez returned to Puerto Rico to form his own band. He recruited “Don Perignon” as his band leader, and brought in his two young-adult sons, Andy Jr. and Harold, as “coristas”. For a short time he also had his daughter as part of the band. Although Andy Jr. has moved on to do other things, Harold has remained in his dad’s band.

Through his 32 years as a solo Latin music artist, Andy Montañez has performed and recorded with several great artists of Latin music. He recorded with Tania Maria, Orquesta La Puertorriqueña, Ismael Miranda, Pablo Milanes, and Grupo Atabal. He has also appeared in numerous albums as a guest artists.

Today Andy Montañez is one of the most respected Latin music artists, enjoying the admiration of colleagues, family, and friends. He encountered and overcame criticism for his professional and personal decisions, but over time was able to prove his integrity and values as a professional and as a family man.

This reminds me of what Sting says in the song “Englishman in New York”; “be yourself no matter what they say”.

Happy Father’s Day…and check out the video below of Andy singing with his son Andy Jr. the song “Genio y Figura”.