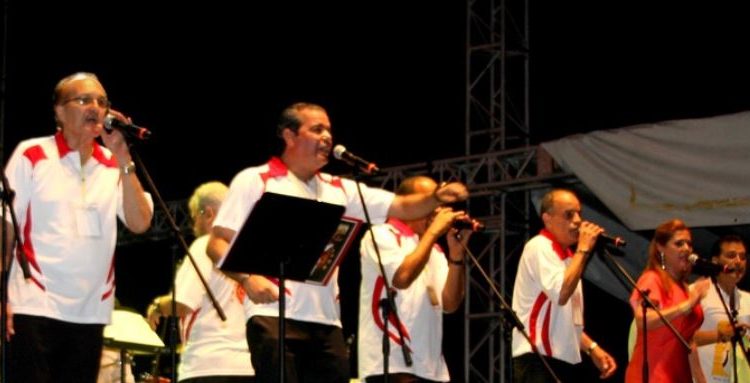 After 17 years of recording silence, the Puerto Rico All Stars are back with a powerful although aimless Salsa music album titled “Echando Candela”.

“Echando Candela” is the 5th recording of the Puerto Rico All Stars, and for this 2013 release included a bunch of Salsa singers. I said 17 years since their last recording “De Regreso”, which was a lackluster flawed comeback effort back in 1996. It really has been 35 years since their last true recording, “Tribute to the Messiah” (1978), which came on the heels of “Los Profesionales” (1977) and their debut “Vol. 1” (1976).

Showcasing new talent is not new for the Puerto Rico All Stars. In the “Messiah” album, which was dedicated to master pianist Eddie Palmieri, the PRAS had established stars in Andy Montañez, Luigi Texidor, Lalo Rodriguez, Tito Allen, and Paquito Guzman, and introduced a barely known 16 year old talented singer named Gilberto Santa Rosa (perhaps the only one not an established star yet at the time).

However, in “Echando Candela” the Puerto Rico All Stars decided to use the term “All Stars” very, very loosely, adding so many new Salsa singers, that it seems anyone available to sing could be considered a “star”.

What I Liked About “Echando Candela”

Powerful Salsa Music – Salsa music lovers will immediately enjoy that the powerful and well-arranged sound of the Puerto Rico All Stars remains intact. The PRAS still has that rich full sound that has distinguished its trademark sound since the very 1st album in 1976.

Plenty of Talent & Female Vocalist – “Echando Candela” demonstrates that the Puerto Rico All Stars can draw great talent. There are great singers, but also great musicians, like Eddie Montalvo in congas, Sammy Garcia, Edwin Clemente, Toño Vasquez, Luis Marín, Piro Rodrigues, and many others. I also liked they added female vocalists, which are mostly overlooked in Salsa music.

Less Singers and Include Only Stars – “Echando Candela” has 22 singers listed! Each of the previous albums by the Puerto Rico All Stars had a maximum of 8 singers. The difference is notable and impacts the quality of the songs.

There are not only way too many singers; but there are some that are not stars! Adding just any singers degrades the “All Star” brand.

Having one songs were all the singers participate is nice! Having 4 or more singers in 6 of the songs is crazy and makes the songs less enjoyable. They did this to accommodate the long list of singers they brought in, which was a mistake!

They should have no more than 10 singers; make sure they are all true stars (not just good – although Moncho Rivera doesn’t qualify either for “star” or “good”) and they you can have 1 or 2 singers per song, with one song for all singers.

4-Song Album – “Echando Candela” lists 9 songs, but when we look at it, there are really only 4 songs in this album. The first 3 songs are original songs, so no doubt about those. Then there is “Usted Abuso” as the 4th song. The rest are fillers.

They also include 2 songs from previous Puerto Rico All Stars albums; “Ciriaco Valdez” from “Los Profesionales”, and “Bomba de Corazon” from “Tribute to the Messiah”. Why did they do this? If they had to use these old songs, because they ran out (or could not afford) more new songs, they could have used these 2 songs to remove the original voices and use a couple of the singers to re-do the song. At least it would have been something new, and they could have spread the many singers for the album.

My Recommendation of “Echando Candela”

This album definitely has a few gems that “Salsa Dura” fans will love, but the production by Richie Viera was poorly done! So much is so much talent completely misused.

There are truly 4 or 5 new songs in this album, that have such musical power and singing talent in them, that most Salsa music fans will enjoy them, although there may be too many singers in each!

My recommendation is that instead of paying $10 for this album, you go to iTunes, Amazon Music, or your favorite digital music store site and download the 1st 3 songs (“Soy Puerto Rico”, “Echando Candela”, and “Tu Dices Que Eres Bravo”) and the version of “Usted Abuso” you prefer. Even if you download both versions of “Usted Abuso”, you still only pay about $5 (a savings of 50%) and still have pretty much the entire “Echando Candela” album.