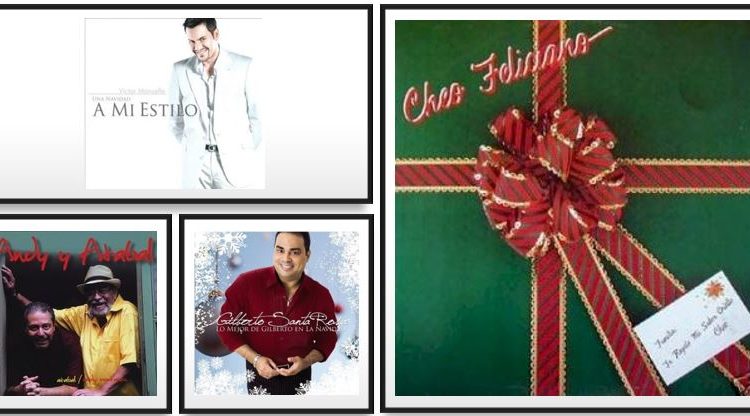 You still have time to update your Christmas Latin music collection, so that the New Year doesn’t catch you listening to the same old Latin music.

In Part 1 of my Christmas Latin Music Favorites, I mentioned mostly classics played this time of year. But there are many more good Christmas music albums that deserve mentioning, particularly if you are tired of listening to your Christmas collection over and over, and would like something new. In that case, let me point out the ones which I like most.

Victor Manuelle “Navidad a Mi Estilo”: this one became an instant favorite the moment I heard it. A very well-done production where Victor Manuelle is at his best.

He got a “little help from his friend”, ex-Conjunto Clasico co-founder Ramon Rodriguez, who not only wrote some of the songs, you can also hear his distinctive Pacheco-like falsetto voice in the chorus. His influence is all over this album, and I love the result.

I highly recommend you this album if you are looking for something new in “Salsa Navideña”.

Gilberto Santa Rosa was recently selected as Tropical Music Artist of the Decade by Billboard, and this album reinforces the talent that got him the award.

Not only Gilberto Santa Rosa’s singing is good, but his production of the albums with El Gran Combo and the trilogy of “Tarjeta de Navidad” albums showcase his quality as a producer.

These albums bring together various artists into cohesive and solid Christmas recordings worth having in your collection. “Asi es Nuestra Navidad” with El Gran Combo is best to have on DVD to enjoy the full acting scenes in the video.

Cheo Feliciano’s “Te Regalo Mi Sabor Criollo” is another good Christmas album by Cheo. It has at least 5 solid hits, with my favorite being the great Chuito de Bayamon hit “La Fiebre“. This song, which starts with a “cuatro” guitar playing the tunes of a “seis”, will raise the arm hairs of any Puerto Rican listening. Cheo would make the great Chuito feel proud.

Jose Nogueras e Ismael Miranda “Versos de Nuestra Cultura“ – this is one of my favorite Christmas albums. Both artists seem to blend well, and Jose Nogueras doing some of his best penmanship. Good “feel good” Christmas theme songs that will make you enjoy and remember the meaning of what Christmas is all about. A must-have in your Christmas Latin music collection.

Plena Libre “De Parranda” – this is a good Christmas album by plena band Plena Libre. It’s sort of strange that a plena band only has this album dedicated to the Christmas theme. I’m glad they did because it’s a pretty good one. My favorite here is “La Gallinita”, and the other songs make justice to an album worth having in your Christmas collection.

Andy Montañez y Atabal “Junte Doble A En La Navidad” – with the Salsa scene in Puerto Rico being kind of slow, Andy Montañez seems to be everywhere. This Christmas recording with his “Tras Talleres” friend Hector “Atabal” Rodriguez and his folk band “Atabal” is very good.

What I like is not only that it uses traditional rhythms, mostly “plenas“, but also that the songs have very direct Christmas topics. You must be thinking, but what else would be the topic of a Christmas album? Well, many Christmas albums do have Christmas themes, but they tend to include either non-Christmas songs, or modern situations kind of related to the Christmas holidays, but not necessarily about Christmas. This album by Andy and Atabal is about Christmas, and I recommended it as a must-have.

We still have more celebrations to come, and I hope the above gives you some ideas on what to consider buying. New this year are Christmas albums by Puerto Ricans Jose Nogueras, Danny Rivera, and Andres Jimenez “El Jibaro” as the most notables.

Adding a couple of new Christmas albums for yourself or as a gift will be a way to keep the Christmas spirit flowing in a year where finances are not so well. But, as the Grinch movie and book say, Christmas is not something you buy in a store, it is much more.