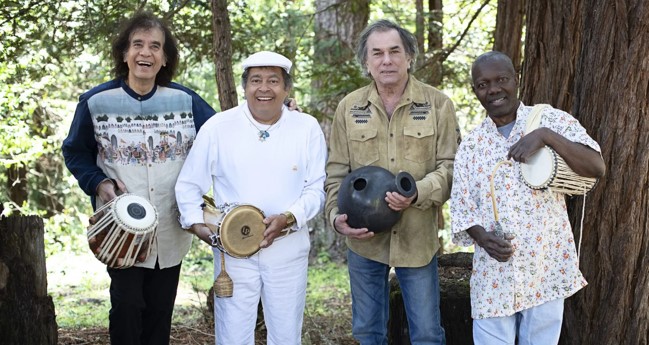 The collective called Planet Drum released “In the Groove“, another collaboration of stellar percussionists led by Mickey Hart, and includes Puerto Rican drum master Giovanni Hidalgo. I sat down (via phone) with Giovanni to discuss this musical project.

“Well, one thing led to another…”, goes the popular phrase, and this is one of those stories.

In 1991 Airto Moreira, the famed Brazilian percussionist was recording an album and invited some of the best percussionists from around the world to participate. From Puerto Rico Airto invited Giovanni Hidalgo and Frank Colón.

The album, “The Other Side of This” was recorded in the home studio of Grateful Dead drummer Mickey Hart. There, Airto introduced Giovanni to Mickey, who was developing a new project of his own…Planet Drum. After Airto’s album was completed, Mickey invited Airto, Giovanni, Frank, and the others to participate in his Planet Drum project. As you might have guessed, “the rest is history”. That history dates back 31 years!

Planet Drum is a project that takes percussion to its maximum expression of musicality. The participants communicate through this common language. They combine their rhythms and styles with some electronics (the old drum and the new technology) along with some vocals, to produce music that’s probably totally different from what you’ve experienced before. It’s a product of their love for percussion, along with a combination of their different instruments and musical perspectives.

Keep in mind that these musicians are masters of their craft. Besides Mickey Hart, the group includes Zakir Hussain (Indian tabla player, composer, percussionist, music producer, and film actor), Sikiru Adepoju (Nigerian percussionist mainly of African and World music), and as I mentioned, Giovanni Hidalgo (the Puerto Rican master is considered one of the best conga players and overall percussionists in Latin music).

So what happens when these master percussionists get together? See for yourself below…

The first album of Planet Drum (self-titled) won the Grammy Award for Best World Music Album in 1991. Besides the percussionists mentioned above, it also included the participation of Babatunde Olatunji from Nigeria.

Sixteen years later, in 2007, Mickey got the group back together. This time, for some legalese reason, they changed the group’s name to the Global Drum Project. The musicians were mostly the same but without Airto.

In 2009, that self-titled album won the Grammy Award for Best Contemporary World Music Album. It reached #6 in the Billboard chart for top world music albums, a bit short of the #1 spot their first album reached on that list.

Another 15 years have passed since that last project. The group’s name is once again Planet Drum, and the core musicians remain the same. Mickey, Zakir, Sikiru, and Giovanni reunited for a 3rd recording.

“It was as if we had just played together yesterday. Once we got together, we took over where we left off 15 years ago” commented Giovanni.

This time around, Giovanni showed up with fewer fingers due to the effects of diabetes. But not even that could make the slightest dent in his always jovial and positive attitude towards life.

“Because of that, I use a stick to play with my left hand. But I don’t care if I have to use a stick, a pipe, a bat, or whatever…I’m going to keep playing. The funny thing is that I learned to play the conga with a stick many, many years ago…by watching my dad, Jose Manuel “Mañengue” Hidalgo toying around with that idea.”

By the way, the senior Hidalgo, a talented conga player and once a member of the famous Richie Ray salsa orchestra of the 1970s, participated in the recording, among other invited musicians.

It’s a big challenge! Each of the two previous recordings produced Grammy awards. Yet, this is a proven concept and the connection between the musicians couldn’t be better.

This music is a fruit of love…we're more than colleagues, we're like family.

When I asked the Puerto Rican conga maestro how was the creative process for this album, he simply replied, “it’s a fruit of love. We love what we do and we put love into our music. We connect with each other through love and the music flows“.

“In the Groove” includes six songs. That’s shorter compared to the 13 of the first recording and the 8 songs of the second one. And yet “In the Groove” is like a good wine; it tasted good when young, but now that it’s aged you don’t need that much to appreciate its quality.

Tip to Better Enjoy “In the Groove“

For enjoying “In the Groove” I’ll pass along the advice Giovanni Hidalgo gave me.

“Turn off your cell phone. Grab a cup of tea and sit in a comfortable chair or lay down in your bed. Put on some good headphones, close your eyes, and just listen intently to this album“.

I did just that, except that I substituted the tea (I’m not a tea person) with a glass of red wine. And I can tell you that by following Giovanni’s advice you’ll be able to really appreciate this album which will likely stretch your notion of music to another level, as it did for me.