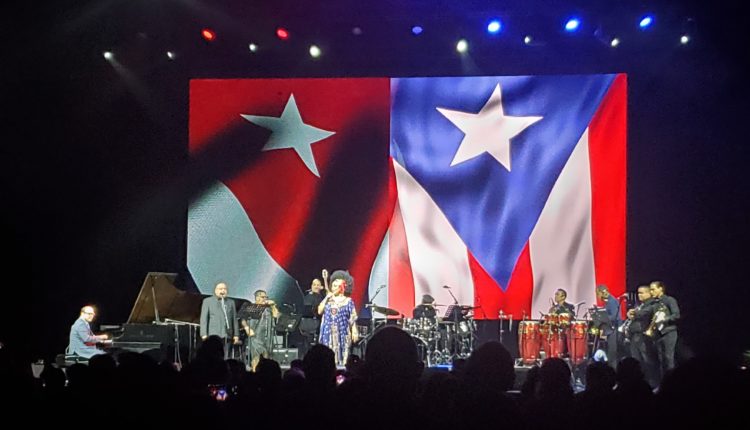 In what turned out to be an all-Cuban night, Aymee opened the last day of the Jazz Fest ahead of follow Cubans Chucho Valdés and Paquito D’Rivera. These two jazz legends would perform together for the first time in over 40 years.

Aymee walked onto the Coca-Cola Music Hall stage to a mostly passive audience. Perhaps this audience was getting settled for an evening with Chucho and Paquito. Instead, the charismatic Cuban singer, sporting her characteristic big afro, found a way to get the audience engaged.

I’ve listened to various Aymee Nuviola albums and knew she’s a talented singer. Aymee has a great sense of the clave and delivers savvy soneos. Her music is heavy, a sort of high-octane Timba-infused Salsa.

This was my first time seeing Aymee Nuviola perform live. It was immediately evident that she’s a very charismatic artist, who is there to really entertain the audience and engage with them. It was impressive so see how she had to use every ounce of her charisma to get the audience to engaged during her performance. Not every artist knows how to do this.

She got the audience to stand up, then to clap along, and then to sing along. At first the audience seemed to reluctantly go along with her requests…but she continued to find a way to slowly get them excited. By the end of her performance, it almost seemed like it was a different audience all-together.

Many of Aymee’s songs were from her recent recordings with another Cuban great pianist, Gonzalo Rubalcaba. Her Celia Cruz songs and her own repertoire showcased her talent and versatility as a singer and performer. Her stage presence was total, feeling in full control of the band and leading them into some improvised mambos.

Aymee Nuviola put on a great performance at the Puerto Rico Jazz Fest. I loved her charisma, her ability to improvise, her ability to read the audience and slowly win it over, and get everyone on the same boat. By the end, the Cuban and Puerto Rican flags were displayed next to each other in the back of the stage.

Which reminds me of one of several funny moments the evening had. Aymee asked the audience….”Cuba y Puerto Rico son…”, and the audience responded, “…de un pájaro las dos alas“. Aymee then commented, “aunque una de las alas está media jodida“, in clear reference to the communist regime in Cuba, which caused the laughter of the audience. That was as close to being political as she got.

Chucho Valdés and Paquito Rivera had no idea how grateful they should’ve been of Aymee getting the audience all excited and engaged for them. She is a true entertainer in the full sense of the word. We really enjoyed her show and would encourage you to check out her music if you haven’t done so.