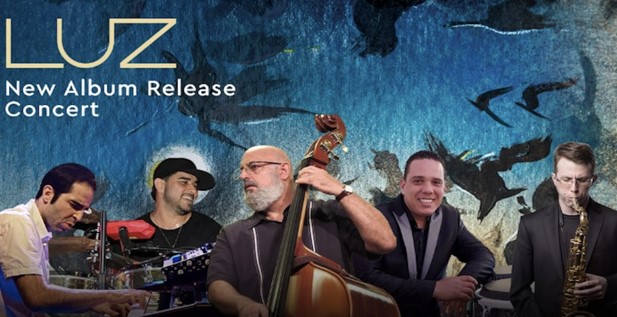 Music, the intersection between friendship and creation, knowledge and instinct, all of which are the source that leads us to make this eclectic record filled with a thousand ideas, life experiences and most of all...a lot of heart!

Eight of the ten songs are originals written by Mauricio Rodríguez (4) and by Venezuelan co-producer Vicente Viloria (4). The album starts with a beautiful piano interlude that introduces us to “Casualty” a smooth jazzy song. From there the album continues to alternate between Jazz and Latin Jazz tunes.

With “Es El Amor” the album turns into a slow quasi-bolero in the beautiful voice of guest singer Adrianna Foster. There’s a Danzon in the mix (“Danzón No 1. Opus 1 con Cha“) as well as two more vocalized songs. These include the title song “Luz” in the voice of Jorge Quintero.

I want to highlight the innovative version of the cover “Claudia” written and executed by Cuban pianist Jesus “Chucho” Valdes during his days with Irakere. In it, Mauricio, who remains relatively low-key in the bass throughout the recording, comes out to take the lead in this slow tempo classic.

Mauricio Rodríguez and the Musicians

In “Luz” Mauricio Rodriguez brings musicians in and out according to the song. He even skips participating in “Es el Amor” to give space to the Violoncello of Jose Pradas, who adorns beautifully the song.

His main collaborators are Gabriel Hernandez Cardenas on piano (appears in 4 songs) and Zachary Bornheimer on saxophone (appears in 3 songs). The other musicians that play the percussion, trumpet, clarinet, and guitar contribute in one of two songs each.

This gives you an idea of the customization Mauricio uses for the instrumentation in each song.

The customized instrumentation, the original songs, and the mix of tempos within Jazz and Latin Jazz make “Luz” a delightful listening experience. Mauricio Rodriguez and Vicente Viloria put together a nice album for those of us who enjoy these genres.