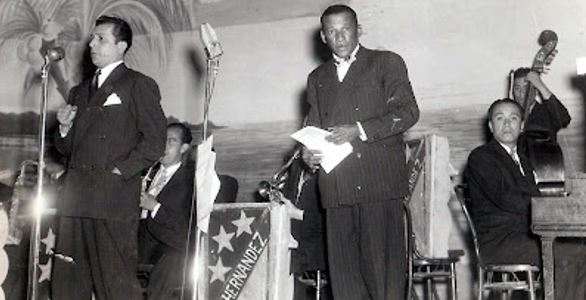 This month we commemorate the 130th birthday of Rafael Hernandez “El Jibarito”, considered one of the best songwriters from Latin America.

I’ll share an anecdote my father told me about him, as my dad knew Rafael Hernandez personally.

They say that people write based on their experiences. Rafael Hernandez was born in Aguadilla, Puerto Rico. Barely a teenager, he joined the municipal band (he could play trombone, clarinet, tuba, violin, piano, and guitar) that traveled throughout the island. “Lamento Borincano” and “Preciosa” probably came from those memories.

Then he joined the Army for WWI and ended up in James Reese’s jazz band that played throughout Europe.

When he returned from the war, Rafael settled in New York City for a while. With his sister, they opened a music store where they also gave music classes. During this time he formed one of the very first guitar trios with his Trio Borinquen. He later visited and then relocated a few years in Cuba, before returning to New York.

As his fame grew, he ended up in Mexico, which had a blossoming movie industry.

One morning, shortly after relocating to Mexico City, Rafael noticed a long line of people that formed close to where he had opened his office. After getting over his astonishment that the line started at the door to his office, he asked the guys in the front of the line; “are you here because of the newspaper ad for musicians?”.

He resigned himself to get on with the auditions. He knew how many musicians he needed for the different instruments that would make up his orchestra. After the first few auditions, he realized that very possibly all of these musicians were really good. Rafael Hernandez ended up hiring most of the first musicians he auditioned for each instrument. There was no point in auditioning all of them only to select the best.

His orchestra in Mexico kept very busy, especially in the movie industry, where he even appeared in-camera in several movies. After a few years, he moved back to Puerto Rico with his Mexican wife as the base for his family.