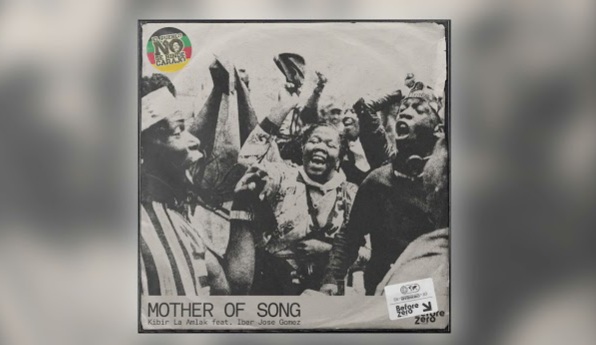 It’s a song, a protest, a call for justice! And it’s framed in the sound and history of the Marimba. “Mother of Song (Queen Marimba)” captures it all.

As you know, I rarely write about singles, but this one merited an exception. I couldn’t resist the compelling story (and timing) behind this song.

As I’ve previously written here in LatinoMusicCafe.com, the Colombian Pacific Coast is home to a large Afro-Colombian community. This community celebrates yearly its culture and heritage in the Petronio Alvarez Music Festival.

The marimba used in this song, “Mother of Song (Queen Marimba)” represents this Afro-Colombian heritage. It’s also a main instrument of the music of “currulao“.

But Kibir and Iber Jose created a second version of the song. They used their song as a backdrop to a speech by Diego Fernando Porto Carrero. Diego is a social leader in the Pacific Coast region who is fighting for equal rights and justice for the black people of this region.

This song is “El Pueblo No Se Rinde, Carajo“.

History of the Marimba

I got the below from the press release from the “Mother of Song (Queen Marimba)” EP:

Located in East Africa, south of Lake Victoria or Nam Lolwe, Nalubaale or Nyanza, to use some of the pre-colonial names of the waters, the Wakambi people, speak of ‘Queen Marimba’ who is credited as being the ‘Mother of all Song’ and creator of countless instruments.

The journey of this instrument from the shores of Africa to the Americas is a journey that is a testament to – the determination to hold onto the memories of your roots against all odds. Recorded in Bogota, Colombia, the Marimbas were carried across the Atlantic Ocean in the memories of the Africans that were stolen, stripped of language, traditions, and cultures, and sold as slaves. Yet despite these atrocities – the strength, beauty, and power of Africa could never depart. The Marimba was recreated from memory and served as an unbreakable thread between the diaspora and the continent.

The name “marimba” comes from the Bantu “ma” (many) and “rimba” (single-bar xylophone).

The Struggle of Afro-Colombians

We're movement, we're rhythm; this rhythmic relation is in our DNA and when that word becomes rhythm, it becomes a word of resistance.

Here’s another excerpt from the EP’s media release:

In 2019, the ‘Humanitarian Refuge for Life’ was staged in Bogota. Feeling as though their freedom and life itself was hanging by a thread, over 3,000 social leaders from all regions of Colombia gathered to take a stand against systemic violence against; African descendants, indigenous people, and women – throughout Columbia. El Gran Latido Sound System provided the amplification and musical backdrop for this occasion and ‘Mother of Song’ was given its first musical airing. The response was powerful and the combination of the traditional Marimba melody with the militancy of the roots reggae drum and bass elevated the spirit of protest.

To honor this story and amplify the cause, an additional version, entitled “El Pueblo No Se Rinde Carajo” has been made featuring a speech from Diego Fernando Porto Carrero, highlighting the ongoing plight of black and indigenous people in Columbia from slavery times up until this present day.

A Good Musical Cause

As you can see, there is a rich history behind the Mother of Song (Queen Marimba) EP. As the press release says…”It is a remarkable coincidence that 11 October 2021 has become “Indigenous People’s Day in the USA as the background to this song is a story of one such struggle.” I hope you support the struggle and listen to these 2 songs on your favorite streaming service.

A Market for Hybrid Concerts