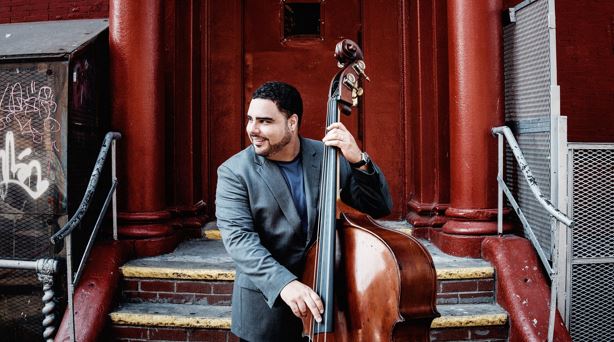 Henriquez is the bassist for Winton Marsalis’ Jazz at Lincoln Center Orchestra and presented this project at that stage back in 2018. The 3-year wait for the recording to come out was worth the wait!

Variety of Latin Jazz Tempos in “The South Bronx Story“

Let me first claim ignorance to Carlos Henriquez’s previous two solo projects, “Dizzy Con Clave” (2018) and “The Bronx Pyramid” (2015). But I can say that this one is an enjoyable experience to listen to. After enjoying “South Bronx Story” a few times, I’m ready to check Carlos’ previous releases.

“The South Bronx Story” includes songs with various rhythms, providing his excellent musicians a chance to showcase their talents. Their integration with the music written by Henriquez comes through clearly.

The Stories behind “The South Bronx Story“

Having grown up in the Bronx from Puerto Rican parents, Carlos was influenced by the great Jazz and Salsa music prevalent in this part of New York City. He drew from his experiences there to compose the music and to title the songs accordingly.

On The South Bronx Story, I am using my music, experience, and heritage as a Puerto Rican growing up in the Bronx to tell a story that looks back and forward.

For example, “Soy Humano” was inspired by his family’s experiences with housing and financial issues when he was young. He also goes back to that time in “Hydrants Love All“, where he and his brother played with the fire hydrant water on the hot summer days.

“Guajeo de Papi” is obviously dedicated to his father and happens to be my favorite song on the album for its smooth tempo.

Citing Carlos Henriquez’ interview in Bass Magazine…”Other tracks ingeniously reference significant people as well as events that created the diverse culture of New York’s South Bronx. Movements include “Black Benji”, a piece inspired by Cornell Benjamin, who is credited for promoting peace among the gangs in the Bronx; “Mama Lorraine” about the life and work of activist Lorraine Montenegro who, along with Evelin Lopez Antonetty, founded the United Bronx Parents but tragically died in Puerto Rico in the aftermath of Hurricane Maria; “Borough of Fire” for the devastating burnings of low-income buildings during the 1970s; and “Moses and the Cross” about the divisive legacy of Robert Moses and the construction of the Cross Bronx Expressway.”

A Great Story to Listen

“The South Bronx Story” is an album with music drawn from personal historical stories, performed by great musicians, and written and arranged with good taste by this talented musician. I believe every Jazz and certainly every Latin Jazz fan will enjoy this recording!