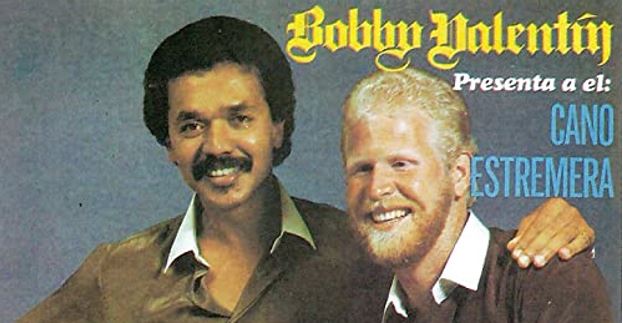 Of course, it’s only my opinion, but to me, it’s clear that “Bobby Valentin Presenta a el Cano Estremera” was Cano’s best album of his career.

Cano was an artist with a very different talent and identity.

By 1982, Bobby saw clearly that Cano needed a solo album. At the time he had 3 singers in the band, with Johnny Vazquez and Rafael “Rafu” Warner also sharing singing duties. All 3 were good Salsa singers.

Cano Estremera had won the hearts of many Salseros singing the majority of the biggest hits of the four recordings he had done with the maestro of the bass. Bobby seized the opportunity to be the one that would record him a full album. And I suppose he appeased Johnny and Rafu by recording the two of them in a separate album without Cano.

This album had the typical 8 songs, and all of them were hits. Yes, all songs were good. The biggest hits were “El Caiman” and “Awilda“, but really all songs became Salsa hits. But even the slowest song of the album, the easy son montuno “Casa en el Campo“, Cano shines in his singing, making it another great song.

For me, there were two things that really stand out of “Presenta a el Cano Estremera“.

First, the song selection was fantastic. Great lyrics of different tempos that allowed Cano to create soneos out of the good song lyrics.

Secondly, Cano had matured as a singer to the point where his wit and voice were at a peak. His voice inflections and soneos were both top-notch. The album really showcased Cano’s talent as a singer. Of course, we already knew he was a great sonero. The combination of being a great singer and great sonero with a style of his own, really made him a favorite of many salseros, including my wife and me.

The cherry on the top of this album was the music and the guest artists. If you listen closely, the arrangements are first class on the album. And although I believe they are not mentioned in the back cover credits, I heard that Bobby Valentin brought in Papo Lucca on piano and Edgardo Morales on timbales for the recording. The album has no solos, a rarity for the time, so it’s hard to tell.

After “Presenta a el Cano Estremera“

A couple of years later, Bobby Valentin recorded a second solo album with Cano Estremera, “En Acción” (1984). In my opinion, it was an ok album, but not even close to the great album its predecessor was.

After the 2nd solo album with Bobby, Cano broke up with El Rey del Bajo and assembled his own band. Although I found his first recording really bad, he later improved and recorded some good albums. I would point out the first “Dueno del Soneo” (1989) album, where he goes into Salsa Romantica, but does it in great fashion. However, none of his other solo albums were par to “Bobby Valentin Presenta a el Cano Estremera“.