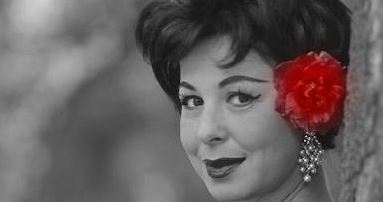 I say this in part for the great quality of her recordings with the Trio Los Panchos and with Danny Rivera. Additionally, I saw Eydie as an artist that understood the Latin culture.

Some Facts on Eydie Gormé

Born to an Italian father and a Turkish mother in the mostly Latino community of the Bronx in New York City, Eydie learned Spanish from a young age. As an adult, Eydie Gormé was an simple, pretty and elegant artist. She developed her career as a singer along the side of her husband of all her life, Steve Lawrence.

Besides her career with Steve, Eydie also achieved great success as a solo artist. “La Gormé”, as she named one of her albums in Spanish (without Los Panchos), which by the way, won her a Grammy nomination in 1970, had much success in the category of “Easy Listening”. Her album “Blame it on Bossa Nova” (1963) was such a success that it launched her way to stardom. Later she won a Grammy award (1967) for the song “Yes, my darling daughter” from the musical “Mame”.

There have been several american artists that have seeked to conquer the Latino music market. Some time ago I wrote a review of Natalie Cole’s album “En Español”. Her father, Nat King Cole, can be attributed with popularizing the idea of the “reverse cross-over” with his album “Cole Español” in 1958.

Eydie Gormé started her reverse cross-over to the Latin market in 1965 with her album “Amor”. She recorded this album with would be perhaps the most popular music trio in Latin America, the Trio Los Panchos.

This album became a favorite for many, including for my dad. He would play it at home and its one of the memories I still keep from my early childhood. The song “Sabor a Mi” would become a theme for Eydie in Latin America.

Unlike other artists that made reverse cross-overs into the Latino market, Eydie did speak Spanish. She understood the meaning of the songs and knew the Latino culture, not only because she knew Spanish, but because she grew up among Latinos in the Bronx.

For me, the full album “Canta en Español” (Sings in Spanish) of Eydie Gormé with the Trio Los Panchos, as well as the beautiful song “Para Decir Adios” (To Say Goodbye) with Danny Rivera, will mark the way I will remember this nice and elegant artist with her velvet voice.

Fania All Stars and The Night Salsa Music Was Transformed