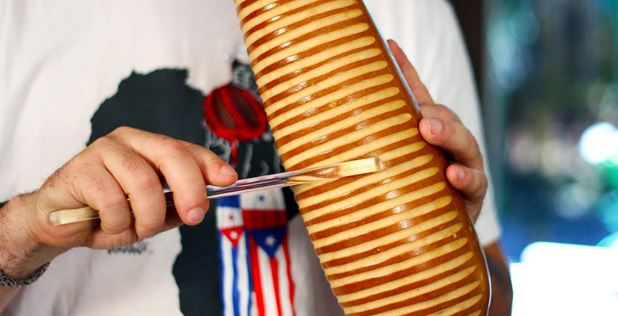 In the mid 1500s four musicians performed at a tavern in the town of Havana, Cuba and used a Cuban güiro among it’s instruments. This was perhaps the first record of this instrument being used post colonization of the Cuba.

In my introduction to this blog series, I explained that the güiro comes from the Taino Indians. However, it’s use in the music after the colonization of the island precedes even the development of the native Cuban music we have enjoyed since the late 19th century.

Early Use of the Guiro

The four musicians named in this early document, consisted of two Spaniards, one Portuguese, and one free black Dominican woman. In the 16th century, a free-black in the Caribbean was a rare thing, as the shipment of slaves from Africa to the Caribbean was booming; a free black woman, even more unlikely. Clearly this woman was special, as she could play the Spanish guitar, the “castañuelas“, and an instrument not familiar to the Europeans; the güiro.

Please note that back then they played Spaniard music, as native Cuban music had not been developed yet.

Perhaps the most interesting part is that these four musicians playing in the town of Havana (it was still not denominated a “city”) incorporated the native güiro to the contradanza music in vouge back then, which arrived with the European settlers. Thus began the evolution from Contradanza, to Danza, and eventually to the Danzón.

But that’s material for another blog. So back to the güiro.

The Cuban güiro, also called “güiro macho” is normally bigger and wider than its Puerto Rican counterpart, the güícharo. The groves on the Cuban version are thicker and deeper, resulting in a deeper (lower) sound.

Like the entire family of these instruments, it’s sound is made by scraping the grooves, in this case with a stick, formally called a “púa”.

Along with the maracas and clave, the güiro is one of the essential minor percussion instruments in Cuban music.

Like the maracas, the güiro seems a simple instrument to play; and in certain ways, it is. But there is a bit more to it than what you see at first sight.

For that, I’m adding here a video from one of my favorite percussion masters, the maestro Bobby Sanabria. Bobby is a living encyclopedia, and will not only show how it is played, but goes into some of its history.

Like he says, this is an instrument that if played well, it will tie together the rhythm of the music in very elegantly.