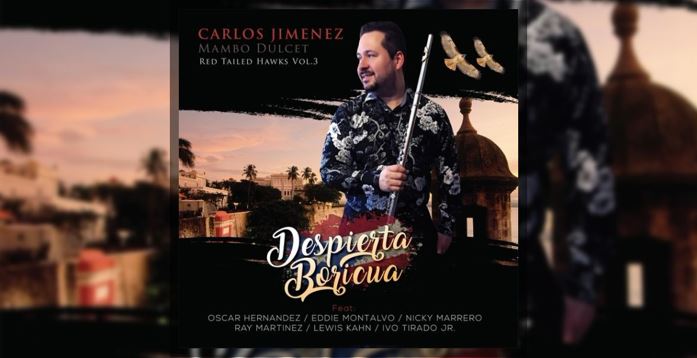 The songs in the album move to the beat of Salsa, although they have spices of Latin Jazz all around.

The EP of “Red Tailed Hawk, Vol. 3” includes 5 songs, although it’s really 5 versions of 2 songs. In doing this, Carlos wanted for the people to focus and spread the message of the songs.

Carlos Jimenez must have great networking skills. The musicians in this recording are all-star caliber, which include:

The music these guys put out is certainly enjoyable to listen.

It’s worth mentioning that the first two volumes also had great musicians in them. These include Sonny Bravo, Edy Martinez, Pate Nater, Alfredo Valdes Jr., Guillermo Jimenez (brother), Lewis Kahn, and Orlando Marin, among others.

As Carlos indicated to me, “I dedicated this volume to Puerto Rico with all my heart, and with the realization that if [Puerto Ricans] love Puerto Rico, they need to wake up and move forward.”

The above is the main message on the song “Despierta Boricua” (Wake Up Puerto Rican). The songs features the nice playing and solo of the maestro Oscar Hernandez on piano.

Carlos, who is from the town of Villalba, adds that to meet this goal, we need to “help each other, support each other, and respect each other”.

Since I live in Puerto Rico I can tell you that right now we are far from that goal, so I hope these songs do bring a change in behavior among Puerto Ricans in the island.

The second song in the album is “Cacique del Yukayeque”. I was going to try to describe this song for you, but I found Carlos own description of it in his website…

“Cacique Del Yucayeque is a dream that I was invited to meet the Lider of the Tainos in Puerto Rico and to have their traditional foods like malanga, chayote, yautia, yuca, batata and play batu in the batey and also help prepare casabe with the very beautiful India Taina. Then after being lost for many days in the huge forest I finally arrived but the Bohio was burning and that was a very disturbing dream. I also added some Arawak taino language that I am trying to learn and I hope those who really know this great history help out more…”.

In the main version of “Cacique” there are solos of piano, bongo, and conga. In the alternate version, Nicky has a chance to stretch out his arms in the timbal.

Here’s the YouTube audio of the song “Despierta Boricua”.

By the way, before I end this blog and forget to mention it, “Red Tailed Hawk” is the English name for the Puerto Rican bird called “Guaraguao”. Although Vol. 3 of this collection is short, it’s certainly sweet and full of flavor.

In case it peaks your curiosity, the other two volumes; Vol. 2 (2013) and Vol. 1 (2011) have 7 and 10 songs respectively. With the great musicians that participate in these recordings, I think it will be worth your while to check them out.

You can find more information on Vol 3., the previous volumes, and all of Mambo Dulcet’s music at the web page of Carlos Jimenez Mambo Dulcet.