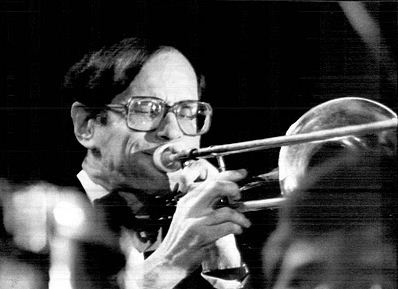 Barry Rogers was probably the most influential trombonist in Latin music from the 1960s to the 90s. His work with Eddie Palmieri and the Fania All Stars earned him the respect and admiration of Latin music fans and colleagues.

My first memory of Barry Rogers was from his participation in the Fania All Stars’ “Live at the Cheetah” albums.  (Note: here’s a short blog on Fania’s Cheetah album, HERE). A few years later he participated in some recordings with Bobby Valentín’s band. In one of those, “El Sonero del Pueblo” Marvin Santiago baptized him as “El Terror de los Trombones” (the terror of trombones). For me, the trombone solo he did in “Prestame Tu Caballo” with Bobby Valentín’s band, was one of the best trombone solos in Salsa. He did another great solo in “Mi Gente” with the Fania All Stars.

Note: I originally posted this blog in June 10, 2011, and I’m re-posting on what would’ve been Barry’s 82nd birthday.

I bring up Barry Rogers because last month I read an article about Barry regarding the anniversary of his birthday. He was one of the duo of trombones for Eddie Palmieri’s “La Perfecta” band. Barry would have been 76 this month. It also happens that this year marks the 20th anniversary of his passing. I therefore want to share some of my thoughts regarding this excellent musician who made a big impact in Latin music.

I’m not going to cover Barry’s bio here, it’s impossible to remember Barry Rogers and not talk about how he was one of the originals of Eddie Palmieri’s “La Perfecta”. With “La Perfecta”, Eddie Palmieri started experimenting with a new sound. He kept the flute, which his brother Charlie Palmieri used in his Charanga Duboney. But Eddie decided to add two trombones. Mark Weinstein and Barry Rogers where the 1st pair, but that later evolved to Jose Rodrigues and Barry. In either case, they where a fantastic trombone duo that set the standard for others to follow.

One of Barry Rogers early followers was Willie Colon. Still in his teens, Willie later decided to form an all trombone band, and cited that Barry was one of his musical inspirations.

Barry Rogers honed his playing style while at “La Perfecta”. Eddie Palmieri was one of the musicians who pursued Latin Jazz from the ‘60s along with his popular Salsa repertoire. Barry was a key contributor to all of these projects.

Contributions with the Fania All Stars and Bobby Valentín

One of my most vivid memories of a Barry Rogers solo, and his talent as a musician where cemented in the solo he did in the song “Préstame Tu Caballo”. Barry played the trombone with a power that was simply amazing. His trombone also had this “hollow” sound to it, that combined with the power he gave it, would completely fill the brass section of a band. In “Préstame Tu Caballo”, the first single from Bobby Valentín’s “Va a La Carcel” dual albums, Barry Roger’s solos sounded much more powerful perhaps due to the acoustics of the venue where they were performing.

The next album by Bobby Valentín, “Afuera”, also featured Barry Rogers on the trombone. It was in this album that Marvin Santiago baptized him “El Terror de los Trombones” during a solo in the album’s 1st single hit “El Jíbaro y La Naturaleza”.

Barry Rogers: The Most Influential Trombonist in Latin Music

It’s a big statement to say Barry Rogers was the most influential trombonist in Latin music. There have been other excellent trombonists in Latin music during his time. José Rodrigues and Mark Weinstein are two of the great ones. Reinaldo Jorge, Leopoldo Pineda, Papo Vazquez, Jimmy Bosch are among many great trombonists. The influence Barry had on Willie Colon, not a great trombonist, but a great bandleader, should also be considered. And yet, it’s clear to me that the influence he had, propelled by his participation in La Perfecta and the Fania All Stars, left a mark in Latin music that no other trombonist can claim.

I will always remember Barry Rogers as one of the greatest in Latin music.