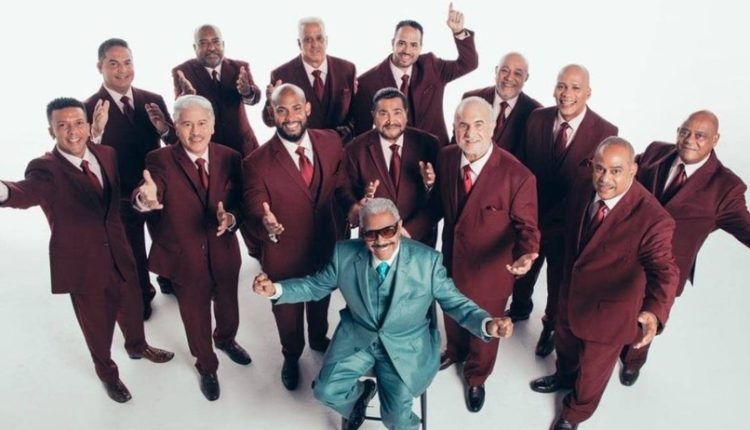 It all began on May 26, 1962, when musicians defecting the troubled Combo of timbalero-bandleader Rafael Cortijo decided to form a new band, a new “combo”, which they would name El Gran Combo.

But the story of one of the most illustrious musical ensembles in the history of Salsa music is not as simple as that. It has a lot of twists and turns, ups and downs, successes and failures. And to get El Gran Combo through all of this, they relied on their leader. One that unlike the leaders of most bands, did not decide to form a band and recruit his friends. Instead, he was selected as leader by his peers.

This event alone would shape the culture of the band. It could be argued to be one of the most important elements on the band’s continued success and longevity.

In this blog series, I’ll be sharing with you my knowledge on the history of the band that is called (perhaps self-proclaimed) the “University of Salsa”, per their 1983 album of that name. Recently, El Gran Combo celebrated 55 years of continued and active success in our Latin American songbook.

A good place to start is to give you a good framework of what was going on at the time. By 1962, Cortijo y Su Combo had built a strong international reputation. Cortijo’s Combo was acclaimed everywhere in Latin America and by Latinos in the United States.

Rafael Cortijo had been a member of “El Combo” directed by Mario Roman. Cortijo took the helm of Roman’s “Combo” in 1955. Upon becoming bandleader, he immediately hired his longtime friend Ismael Rivera as lead singer. What is known today as Salsa music was still not conceived in the mid to late 50s or beginning of the 60s. However, it was just around the corner.

The craze in New York was the Pachanga and the Charanga. Tito Rodriguez’s band and Charlie Palmieri y su Charanga La Duboney, two of the main bands at the Palladium, were hitting all cylinders on these. Tito Puente also was into the Pachanga. However, he also kept playing his Afro-Cuban jazz, just like his mentor Machito did. Machito and His Afro-Cubans continued to cultivate the Guaracha, besides his innovative Afro-Cuban jazz.

In Cuba, Benny Moré was the king with his big band, even under the tight grip of Fidel Castro’s 3-year-old revolution. Meanwhile, La Sonora Matancera left Cuba with Celia Cruz and established themselves in New York. They arrived there after spending a couple of years in Mexico, as their first stop in defecting from Castro’s dictatorship.

Other Things Happening in 1962

Talking about movies, in Puerto Rico singer and songwriter Bobby Capó participated in the local production of “Romance en Puerto Rico” with comedian Jose Miguel Agrelot, who had the Coliseum of Puerto Rico named after him, and where today’s top artists and acts perform.

To round up the scene of 1962, Luis Muñoz Marín (whom the San Juan international airport is named after) was entering the second half of his last term as governor of Puerto Rico.

Meanwhile, a new baseball stadium was inaugurated in San Juan. It was named after the first Puerto Rican to play in the Big Leagues, pitcher Hiram Bithorn.

The new stadium had followed the joy Puerto Ricans and all Latinos felt when Roberto Clemente won his first of four National League batting titles a few months earlier in 1961.

But let’s get back to music. Alfred D’ Herger and his “Nueva Ola” movement were taking top billing in TV shows and radio airwaves in Puerto Rico. He did this by recruiting young-talented artists like Chucho Avellanet, Yolandita Monge, Lucecita Benitez, and Ednita Nazario among others.

The music of guitar trios was still very popular. Felipe Rodriguez y sus Antares were constantly playing in jukeboxes around the island. Other trios played in the Caribe Hilton, the Hotel Normandie, and the Escambron Beach Club. The latter was celebrating 30 years as the main music venue in Puerto Rico.

Meanwhile, Cortijo y su Combo was riding the wave of their greatest hit, “Quítate de la vía Perico”, released in 1961. They were the house band for the popular TV show “La Taberna India”. The show was seen in black and white since color TV wouldn’t become widely available until the mid to late 60s. Cortijo’s Combo was enjoying great success with their formula of Guarachas combined with a heavy dose of Puerto Rican Bomba and Plena.

Acángana – The Bust and The Split

At the peak of their fame and success during their 8-year run, Cortijo y su Combo with Ismael Rivera fell suddenly and hard. Returning from a trip to Panama, the band was searched at Customs based on a tip. Several pieces of the band’s luggage were found with drugs. Ismael Rivera took the fall and was sent to prison for 3 years.

The band fell into disarray! The members of Cortijo’s Combo didn’t know what to do. Should they regroup with a new singer or should they disband and each one start anew? Some decided to stick with their visionary leader, as Rafael Cortijo was one of the first to use decaying Puerto Rican folk rhythms of Bomba and Plena in a dance band.

Note: the other pioneer and first to do this, which perhaps Cortijo emulated, was pianist-bandleader Cesar Concepcion. Concepcion is credited with having introduced Plena to Latin American classy ballrooms. It seems like nothing today, but back then, it was introducing black’s music into mostly white venues.

Other band members weren’t so sure about regrouping. Instead, they decided to meet at the house of Roberto Roena’s mother to discuss what to do next. Some of the members of that meeting included Eddie “La Bala” Perez, Martin Quiñonez, Miguel Cruz, Kito Velez, Rafael Ithier, and of course, Roberto Roena.

The first thing the group decided was to form a new band. What was still undecided was who would lead the band. Upon further discussion, the group landed on pianist Rafael Ithier as the most capable individual to lead their new band. And the name of the new band? That would have to wait.

It Was Not “Un Verano en Nueva York”

Cuban producer Guillermo Alvarez Guedes had an album in the works for Dominican singer Joseito Mateo. He needed a backup band for his merengue star. The story has it that he heard of the meeting at Roena’s mother’s house, and approached Ithier.

Since the group didn’t have a name, Alvarez-Guedes proposed to call it Rafael Ithier y su Combo. This was in obvious similarity to Rafael Cortijo y su Combo. Ithier opposed the idea mainly because he was so frustrated with the situation that happened with Cortijo, that he wasn’t thinking of staying around much longer than a few months. Since the word “combo” was in vogue those days for mid-size bands, the group landed with a name that would reflect a “new and improved” combo, a great combo; El Gran Combo.

The public in Puerto Rico, who mostly idolatrized Rafael Cortijo, began to call the new “combo” traitors. They saw them as leaving the group when things got tough and the combo was down. How could they dare to do this after they enjoyed all the success Cortijo had for so many years.

At first, El Gran Combo faced a strong public opinion backlash. They couldn’t even find a place to rehearse. Nobody would give them one. The album with Joseito Mateo, wasn’t such a smash, so things weren’t looking like a “Camino de Amapolas”. But their luck would change, and so would the public opinion of El Gran Combo.

In the midst of a busy music scene in 1962, the founding members of El Gran Combo found themselves between a sword and a hard place.

On one side, they were linked to the drug bust of Cortijo’s Combo. This meant public opinion considered them all drug users.

On the other hand, they were being treated as traitors for abandoning one of the most beloved bands in Puerto Rico and Latin America.

The rocky start didn’t help, but El Gran Combo would persevere for two main attributes they had. The first attribute was the visionary eye of Rafael Ithier, who had a good pulse on the public’s musical taste.

The second attribute was the participatory approach the band had for all decisions. This probably originated from the fact that Ithier wasn’t thinking of sticking around for long. Therefore, he didn’t want all decisions and responsibilities to fall on his lap. In fact, El Gran Combo was born as a collective decision and would remain as perhaps the most participative band for its members. They were the most progressive band in terms of decision-making and participation in the management of the band.

In the next part of this blog series on the History of El Gran Combo, I’ll go over the highlights of the decade of the 1960s.