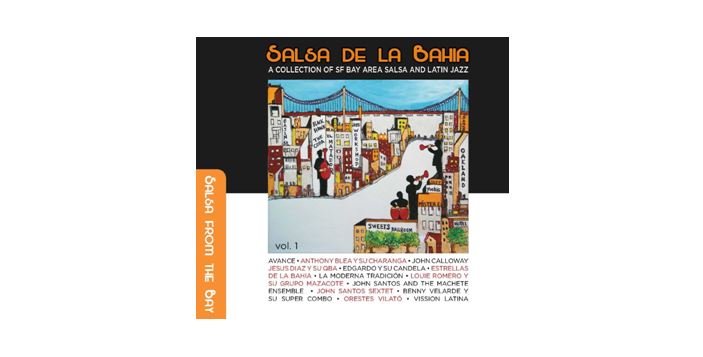 This is a rare Latin music gem! “Salsa de la Bahia” is a concept album that captures the great Latin music played by bands in the San Francisco Bay Area. This album is part of a documentary about Salsa music and dance, and I consider it a treat for Salsa and Latin music lovers everywhere!

The quality of the “Salsa de la Bahia” project is so good I’ve been debating where to start to tell you about it. Because of the amount of good music in the Bay Area, this is a 2-CD set, featuring 13 bands that include Orestes Vilató, John Santos, Louie Romero, Jesus Diaz, John Calloway, and Benny Velarde, among others.

The information about the “Salsa de la Bahia” project is so abundant and good, that I will “borrow” some of it during this blog. Like for example, to explain the music of the album, the website says….”The fact that all of the bands featured on the CD are active, save for the Machete Ensemble, speaks to the scene’s vitality. At the same time, all the music, except for the three Estrellas De La Bahia tracks, was originally released on indie labels, which goes a long way toward explaining why so much of it stayed under the national media radar.”

And precisely because this music stayed mostly under the radar it explains why perhaps most of us might have not heard of it before.

This ambitious and important project was put together by Bay Area trombonist/arranger and educator Wayne Wallace, who decided to play a supporting role in this album, rather that also be featured with this band. He worked closely with filmmaker/dancer Rita Hargraves, who leads the documentary piece titled “The Last Mambo”.

What I Liked About “Salsa de la Bahia”

What I Didn’t Like About “Salsa de la Bahia”

errrr…I know I always pride myself in looking for something that could have been done better in every recording I review in order to maintain some objectivity on the review and not be biased, but I can’t come up with anything for this one! Ok, I’ll say it, I may be biased on this one! I love the music and the concept!

From what you have read so far it’s obvious that I loved “Salsa de la Bahia”. Some of the traditional Cuban music sounds really authentic, the Salsa music by the bands I didn’t know before is fantastic, and the Latin Jazz is top notch!

“Salsa de la Bahia” will not only get you familiarized with the great music of the bands in the San Francisco Bay Area, but also has a nice booklet with liner notes that provide a little history about the Salsa and Latin music scene in San Francisco, as well as of the bands featured in these albums.