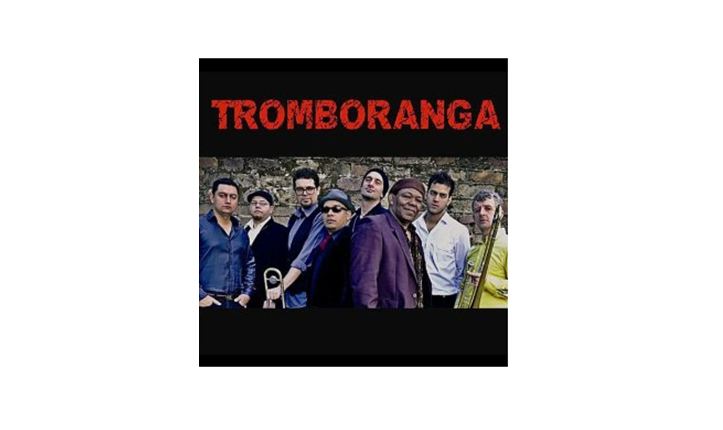 I find it fascinating that a fairly new band like Tromboranga has been able to release their 2nd Salsa album “Al Mal Tiempo Buena Salsa” in 2 years despite the economic crisis in their native Spain.

Based in Barcelona, Tromboranga is led by Venezuelan percussionist Joaquin Arteaga, with whom I did an interview which you can listen below.

Tromboranga doesn’t have the financial backing of a record label. So when they entered the recording studio on their 2nd day of sessions, their recording engineer tried to cheer them up despite the local financial situation by saying…”hey, al mal tiempo, buena Salsa” (for bad times, good Salsa).

Joaquin immediately recognized that as the title of their 2nd “Salsa dura” recording. The Salsa dura album “Al Mal Tiempo Buena Salsa” showcases Salsa music the way it was meant to be played. The maturity Tromboranga has acquired during this past year is evident. They added more solos to the songs and added more musicality to the trombones. With the trombones, they used two or even three lines. Additionally, they kept their Salsa recipe kind of a loose “planned improvisation”, which keeps songs fresh and flowing naturally.

I talked about the Salsa musicality evolution of Tromboranga with Joaquin Arteaga in an exclusive interview for Latino Music Café. Here is an audio clip of that interview, where Joaquin explains why the Tromboranga sound is more mature in “Al Mal Tiempo Buena Salsa” vs. in their 1st album self-titled “Tromboranga” :

The combination will surely please any Salsa music fan. The 10-piece Salsa band includes a 3-trombone section led by Venezuelan Vladimir Peña. The other two trombones are Tom Johnson and Albert Costa. This Salsa album was recorded under their own independent Bloque 53 record label.

What I Liked About “Al Mal Tiempo Buena Salsa”

Good Old Salsa music – as I said, this is Salsa music the way it was meant to be played. It has good swing, with mostly original songs. It incorporates some of the musical clips taken from some old songs. The songs have two “coros”, and at times a 3rd “coro” is made by shortening the 2nd “coro” to give the song more “ajite”. The trombones do two or sometimes three lines of melodies within a “mambo”. There are solos of conga, timbal, and trombones. This was something missing in their first recording as I pointed out on my review of “Tromboranga”. Additionally, it even includes a piano solo, something not see very often other than in Papo Lucca’s Sonora Ponceña).

Creative Singing – I’m rapidly becoming a fan of Freddy Ramos. This guy is a funny and very resourceful “sonero”. For example; in “Repica Bien el Tambor” he sings…”Guaguancó para el que sabe, también pa’l que no ha aprendío” in reference to the old Johnny Pacheco-Hector Casanova song “Guaguancó Pa’l Que Sabe”. I haven’t seen him live to judge his improvisational skills, but his “soneos” are creative and always on the song’s theme. Diego brings the Cuban flavor to the band and can also be funny and spontaneous. Both sing very naturally and the fact that both are good in noticeably different singing styles makes the whole album refreshing to listen.

Great Swing and Arrangements – the piano and bass are the key of any Salsa music band. Rafael Madagascar (piano) and Felipe Varela (bass) make a great combination and play with great sense of swing. The metal arrangements are much more inventive than in the 1st album, and are a delight to listen. Salsa dancers will have a ball with the swing in this Salsa album!

My Favorite Songs: …include “Rompe Colchón” a funny tune with great mambos, great singing by Freddy Ramos, and a great arrangement (also by Freddy). I also like “Alabanciosa”, where Diego brings from his home all the Cuban flavor that was there and uses it in a funny theme. “Soy Sonero” opens the album and features both Freddy and Diego singing together for the 1st and only time. Finally, I also like “Te Provoca”.

“Te Provoca” – This song has a feature used in old Salsa songs. After the song theme is introduced by the singer, the “coro” comes in, but instead of the singer coming in immediately with “soneos”, a wind instrument is featured for 2 or 3 “coros”. Larry Harlow, with his great brass section, used this technique frequently, sometimes alternating a trumpet and a trombone in the “coros”. Salsa great Luis “Perico” Ortiz would use this technique to showcase his trumpet skills in this space. In “Te Provoca” the trombone takes on the first 2 “coros” to then gives way to the singer. I also like that Felipe Varela plays a lot around the “clave” on the bass, amplifying the song’s swing. Nice!

Piano and Mambo in “El Mensajero” – I like Freddy Ramos’ “El Mensajero”, but mostly because it has a nice piano solo by Rafael Madagascar, followed by a fenomenal mambo. The way the trombones enter after the piano solo is electrifying…truely “para-pelos”.

As you can see I liked a lot of things about this album, but I want to stay objective. Contrary to my review of the 1st album “Tromboranga”, I did not find anything I would have done differently from a musical perspective.

That’s me speaking as a Salsa music fan. But… Mambo Salvaje – is just that, a wild mambo which didn’t do a whole lot to me other than fill in to round-off the album.

As you can tell, I loved this album. I enjoyed the original songs with neighborhood (“barrio”) themes and Salsa Dura musicality. The use of solos in the mambos and even in the “coros” was nicely done, giving chance for the conga, timbal, piano, and trombones to be highlighted in the album.

Great arrangements and good singing make this album a delight to listen and will be a Salsa dancer’s dream! If you are a Salsa music fan, I can’t see how you would not love this album! Nough said!

I’m not asking for money just for your support. If you like Salsa and Latino music and liked this review, please support us by “Liking” this review and also “Like” our Facebook site and to “Follow us” in Twitter if you have an account. Also, spread the goodness and send this to your Salsa music-loving friends!

I appreciate your support in helping Latino Music Café!