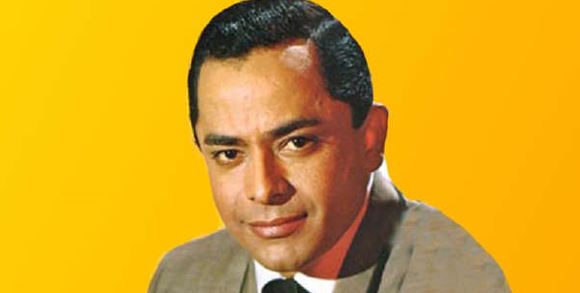 Tito Rodriguez was the ultimate Latin music entertainer of his time. Tito could sing equally well “guarachas” and “boleros“, he could dance, play the timbales and vibes.

He had a unique charisma that won over Latino audiences across the United States and Latin America. This puts Tito Rodriguez in the same category of extraordinaire entertainers like Sammy Davis, Jr.

It has been over 40 years since Latin music lost the maestro Tito Rodriguez. To commemorate the occasion, Fania Records released the CD “Boleros del Ayer“. This album captures 14 of Tito Rodriguez most memorable “boleros”.

These are the two words with which I describe Tito Rodriguez. To this day, Tito remains one of the handful of singers that could sing equally well “guarachas” and “boleros”. Many singers do both, but only a handful do both well enough to create big hits out of each rhythm.

Tito Rodriguez began singing mostly “boleros” at a young age. However, it would be his unique style of singing “guarachas“, what is now called Salsa, that would open the doors for him into Latin music greatness. His versatility and his ability to attract women to his presentations earned him a spot at the Palladium. At the time, it was the premier stage for Latin music in New York. At the Palladium , his band alternated with such greats as with Machito and his Afro-Cubans, as well as with Tito Puente’s orchestra.

Because of his great versatility and charisma, Tito Rodriguez landed his own TV show in Puerto Rico. His show included comedy sketches, interviews, and songs with musical guests. Although short lived, having had a TV show is not something many musicians can add to their resume.

Tito Rodriguez played frequently at the Palladium during the 1950’s. He honed his skills as an entertainer at this big stage for Latin music. Perhaps because he was alternating the stage with the best bands of the time, Tito’s competitive spirit came out.

Tito Rodriguez wanted to have the best Latin music band of the time. He hired the best musicians available, paid them well and treated them well, in order to keep them. His album “Esta Es Mi Orquesta” showcases his band in mostly instrumental songs, highlighting such greats as Panamanian trumpeter Victor Paz, Cuban bassist Israel “Cachao” Lopez, Dominican saxophonist Mario Rivera, and Cuban pianist Rene Hernandez among others.

In those years, bands dressed formally for their presentations. Tito Rodriguez wanted his band to be sharpest of all. I recall a conversation I had with conguero Johnny Rivero (Little Johnny) in a presentation Eddie Palmieri did in Seattle a couple of years ago. I asked Little Johnny why Palmieri’s band dressed so sharp, and he mentioned that was part of Palmieri’s discipline, which he probably got from his days playing with Tito Rodriguez.

The competitiveness for the Palladium supremacy created a feud with Latin music great Tito Puente, which is well known to have lasted for years. This and other events, led Tito Rodriguez to write what we now call “tiraera” songs (songs aimed at a particular person, but not mentioned by name). Such songs include the likes of “Avisale a Mi Contrario” (supposedly aimed at Tito Puente) and “El Que Se Fue” (theories of who its amid at vary, but some suggest it was directed to Johnny Pacheco).

It was the “bolero” that help internationalize Tito Rodriguez through Latin America. The “son” reached everywhere, but the combination of a good “guarachero“, “bolerista“, and entertainer, made Tito an international star. For all this and his stage presence, I consider Tito Rodriguez the 1st “Caballero de la Music Latina” (Gentleman of Latin music).

It’s hard to remember singers for both, their “guarachas” or salsas, and for their “boleros“. Cheo Feliciano is one that comes to mind. Cuban Benny More also had extraordinary talent on both genres. What separated Tito from the rest was his extraordinary stage charisma and sense for being the ultimate entertainer. And he still remains “inolvidable” after 40 years of leaving us.

Tito Rodriguez in his TV Show with Eddie Palmieri

Here is a clip of one of Tito Rodriguez TV shows where he had Eddie Palmieri as his guest, and they perform a bolero together.

If you still want to savor what it was like when Tito performed at the Palladium, check out my historical-fiction story of “Tito Rodriguez’s Substitute Bandboy” HERE. Enjoy!

Juan de Marcos: the Cuban Music Archeologist Back in the U.S.