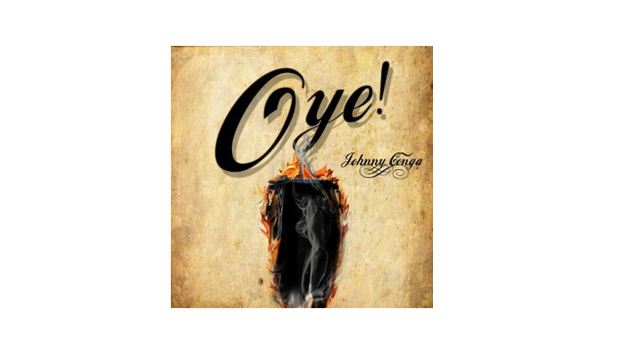 Johnny Conga spent 3 hard years putting together this album, from 2010 to 2012. When he finally completed it, he wanted to grab your attention so that you would at least take notice to listen it. That’s why JC told me he titled this album “Oye” (which means “Listen”).

If you want to skip the reading, I have a video review of “Oye” at the bottom of this blog. However, I think you’ll get more of it if you read through it.

The road to releasing an album is not easy, especially if you are doing it all on your own. It takes talent, patience, and persistence to release a recording that reflects the music a musician has in his/her head. For New York native, and Seattle resident Johnny Conga, “Oye” represents his 3rd recording as a bandleader.

In those 3 years, Johnny Conga…
• selected and put together the music for “Oye”
• arranged or co-arranged 7 of the 10 tracks in the album
• selected the musicians…
• and slowly and patiently did the recording, first laying the music front to back, and then back to front.

He hand-picked his musicians mostly from the Pacific Northwest, where he has resided for the last several years, with the exception of Mario Moreno, his main piano player whom he flew in from Miami.

All in all, in “Oye” JC plays the congas, bongos, timbales, vibraphone (does a nice job at it, something I didn’t know JC could do), cajón, clave, cowbell, guiro, and vocals.

“Oye” was released in November 2012 with Johnny Conga being the Executive Producer for “A Hand to Drum Productions”.

What I Liked About “Oye”

The main thing I like about “Oye” is that here Johnny Conga showcases the music, instead of the music mostly showcasing JC, as seemed to be the predominant trend with his previous release “Breaking Skin”. This time the music is at center stage and Johnny Conga does a great job of making a good music selection. Some are his originals interlaced with classics like “Mambo Diablo” from Tito Puente, and “Footprints” from Wayne Shorter.

The arrangements play an important role in making the album enjoyable. Johnny Conga puts into play his 48 years of experience in the music business to make the arrangements a nice mix of mostly progressive Latin Jazz songs.

The songs have a good variety of jazz tempos, keeping the listener engaged through the songs and through the album with mixed faster and slower Latin Jazz tunes.

Johnny Conga adds in 2 street-type rumbas; “Mullaly Park-Bronx Rumba”, which comes in as the #4 song of the 10-song recording, and it’s almost an interlude at under 3 minutes duration, and “Rumba y Guarapachangeo” at the #8 spot.

My favorite songs are Johnny Conga’s “Chablue”, and Wayne Shorter’s “Footprints”. Both are great songs that use the band’s talents with a good mix of rhythms during the songs.

My Recommendation of “Oye”

For me “Oye” is a very good Latin Jazz album. The music is just really good; JC’s percussion does not dominate the album, and the songs and arrangements are really good. I enjoy listening to “Oye” much more than “Breaking Skin”, and “Breaking Skin” is not a bad album.

The recording, mastered by Julio Jauregui, and mixed by Julio and Johnny, is of very good quality.

“Oye is a very enjoyable album to listen to for any Jazz fan, and especially for Latin Jazz fans. I can say that the 3 years that it took JC to put “Oye” together were worth the effort. You can’t go wrong with this album.

Here’s my video of the review of the Johnny Conga album “Oye”.