Is Politics a Good Mix for Latin Music Artists? 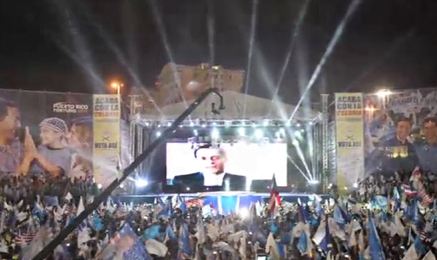 Is it appropriate for Latin music artists (…and yes, this applies to all artists and other public entertainers in general) to engage in politics and perform at campaign events of political parties?

Is the reaction different by either the place (Latin America vs. U.S.) or by type of campaign support (monetary contributions vs. event performance)?

Marc Anthony is the latest victim of mixing politics with public political endorsement. Marc decided to appear in the campaign closing event for Puerto Rico’s pro-statehood New Progressive Party (PNP in Spanish acronym) and has drawn heavy criticism in the social media apps.

On the same note, Ricky Martin is scheduled to do the same in the U.S. for the Democratic Party. Yet, I have not seen the same backlash for Ricky in the social media world.

Politics are viewed and consumed differently in Latin America vs. the U.S. For example in Puerto Rico, where Marc’s participation in the PNP campaign closing even has drawn sharp criticism, including the use of foul language by some in Twitter, the election participation rate of the voting population is around 80% on average. The electoral participation in the U.S. is around 40%, or half of Puerto Rico’s. In Puerto Rico, election day is a holiday, not so in the U.S., where you may take a few minutes from your work day to go vote, and then the day continues as any other business day does.

In Puerto Rico, politics are viewed as “the national pastime”. The photo of the governor or other political figures appears on the main newspaper cover page almost daily. In the U.S. you rarely see that happen, unless it’s after a debate or 2 weeks before the election. Does this explain why Ricky Martin is not getting a backlash in the social media?

Artists and other public entertainers (musicians, athletes, etc.) have the same right to their political opinion as anyone else. We should respect that. But could it be the type of support to a political party that drives the reaction? If Marc Anthony had simply stated he is pro-statehood for Puerto Rico, and contributed to the PNP campaign, it may have drawn the disappointment of half of the voting population in Puerto Rico, but perhaps not a social media backlash. Singing a nationalistic song like Rafael Hernandez’s “Preciosa” may be a totally different deal. But the question is….should it be a totally different deal?

As public personas, artists and entertainers, be that Latin music artists, boxers, Major League Baseball players, etc., have the power of grabbing public attention and interest. With that, they can influence people choices. That is the reason they are used as spokespersons by private and public companies to pitch their product or services. Professional athletes sometimes make more money in endorsements than on the playing field. Companies pay them for their power of attention and influence.

It is known that religions as well as politics are very personal in nature, and very controversial topics. As public personas, should Latin music artists and entertainers be actively participating in public political campaigns?

My personal opinion is that Latin Music artists and other non-political public people should not participate actively in political campaigns. However, I do think they can support their preferred political alliance, be that by money donations or by stating their support to a particular initiative or political party, as a matter of personal opinion, even when stated publicly in an interview. I think that is ok.

Look, Ricky Martin is now a Buddhist follower (has been for quite a while), but I don’t see him trying to publicly influence people to convert to Buddhism! If asked, he will state why he likes it and why it works for him, and leave it at that. I think artists should stay away of political and religious endorsements. As music fans, we respect their personal opinions and choices, but using their public persona to try to influence the public choice in these two areas goes into the risky proposition of mixing politics and art.

Look, a couple of years ago I supported Juanes, Olga Tañon, and others who went to Cuba to perform for the people of Cuba in a free concert. I believed, and Juanes stated this many times, that it was not a political event. Nor did it intend to show any support for the political system in the island. I supported them because I see the separation between politics and art. On the same token, Ruben Blades has performed in Venezuela, despite not being a supporter of Hugo Chavez.

If music and politics continue to be mixed, it will bring unintended consequences, when Republicans will despise Ricky Martin and people will continue to insult Marc Anthony in twitter. To paraphrase one of Marc’s songs, eso “no valió la pena”!