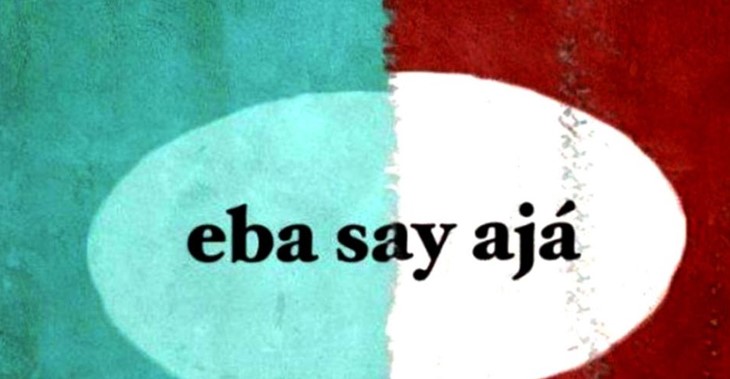 This project was in the works for many years (6), before Rubén Blades began work in the Panama government.

“Eba Say Ajá” is a joint album of Cheo Feliciano and Rubén Blades in which each singer performs songs from the other singer. The music and Cheo’s voice were recorded shortly before Ruben started as Minister of Tourism in Panama. Rubén added his voice after the 25th Anniversary of Seis del Solar tour.

The is a great cast of musicians that participate in “Eba Say Ajá“. It includes musical director and arranger Luis García on the Tres guitar, Luis Marín on piano and vibes, Cachiro Thompson and Georgie Padilla on congas, Charlie Sierra on timbales, and Pedro Perez on bass. The chorus is done by Luis’ brother Darvel García, Wichy Camacho, Batacumbele alumni Cheguí Ramos, and Primi Cruz.

The album was produced by Rubén Blades Productions. It was dedicated to the memory of Puerto Rico’s Z-93 radio programmer Pedro Arroyo, who created and institutionalized the yearly “Día Nacional de la Salsa” event.

Where Did “Eba Say Ajá” Come From?

The album title comes from a phrase Cheo Feliciano used at the beginning of his career….supposedly from a purposely derivation of the phrase in English “everybody say ajá“. Bobby Cruz later adopted the phrase and used it even more extensively than Cheo ever did.

Rubén Blades, an admirer of both Cheo Feliciano since his Joe Cuba days, and of Bobby Cruz and Richie Ray, adopted the phrase during his time with his band “Seis del Solar”.

Because both Cheo and Rubén had used the phrase at some point in their careers, they named the album “Eba Say Ajá”.

What I Liked About “Eba Say Ajá“:

• Having Rubén Blades and Cheo Feliciano singing each other Salsa hits is a treat in itself. Enough said!

• The use of a vibraphone instead of metal winds was a perfect choice for this album. Both Cheo and Rubén used the instrument during their respective careers.

• The musical arrangements, adapting the songs originally recorded with winds to the vibraphone format were done with creativity and good taste.

• The adaptation of the Cheo Feliciano (authored by Tite Curet Alonso) song “Franqueza Cruel” to a Salsa format and performed by Rubén Blades was masterful.

• One of my favorite songs on the album is “Busca Lo Tuyo“. In this Eddie Palmieri-Cheo Feliciano salsa classic, Rubén Blades does a masterful job with original “soneos“. In the song he says the most creative phrase of the album when he introduces the piano solo by saying “…no es Palmieri, pero es bueno; Luis Marin….te dos tin güe“.

• My other favorite song interpreted by Cheo Feliciano is “Inodoro Perez“. This is the only new song on the album.

• One of the things I missed in this album was having Cheo and Ruben sing songs together, in duet format. They only did a duet in the “bolero” “Si Te Dicen“, and in “Lo Bueno Ya Viene“, a “bolero” that turns into “guajira” in which they exchange “soneos“. I would have loved them to exchange “soneos” in a couple of Salsa songs. The fact that they didn’t record most of the album voices together limited the ability to do this effectively.

• I perceived Cheo Feliciano’s interpretation of “Manuela” as a bit forced. It didn’t seem a good fit for Cheo’s style at this point in his career.

• “De Aquí Pa’ Allá” was a good song interpreted by Rubén Blades. But I would have preferred some other Cheo Feliciano salsa hit, like Rubén Blades own composition “No Vuelvo Más“, which Cheo sang in his 1976 album “The Singer“.

• “Eba Say Ajá” is a classic salsa lover’s dream album, as it brings two stars of Salsa music together to record each other’s past Salsa hits.

• The arrangements and adaptations were excellent. It has a solid performance by the studio band put together and directed by the experienced maestro, and Cheo Feliciano’s frequent collaborator, Luis García.

• One curious fact of this album is that even though both Cheo Feliciano and Rubén Blades used the phrase “Eba Say Ajá” during their careers, none of them used it during this album.

• If you like Salsa music, particularly the ’70s and ’80s style, you will love these two great Salsa singers performing in this album.