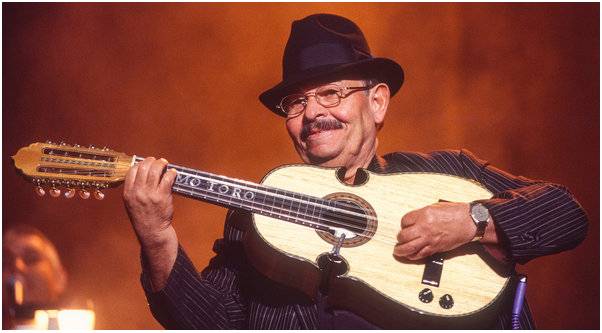 Yomo Toro had a peculiar nickname. Born Victor Guillermo Toro Vega, his father nicknamed him “Yermo” (for this 2nd name) but that somehow evolved into Yomo. The first time I heard his name in my pre-teen years, I imagined the name being written “Joe Motoro”, which I found really strange. I later learned the correct spelling.

The Puerto Rican “cuatro” and the Cuban “tres” are similar instruments even though they are distinctively different. With the “tres” being part of the son, Yomo Toro could have approached the use of the “cuatro” playing it somewhat like a “tres“. It wasn’t like Yomo didn’t know how to play the “tres“. He played the instrument in Larry Harlow’s “Tribute to Arsenio” with the “tres” being the instrument played by the late Cuban son master Arsenio Rodriguez.

Yomo Toro was a well-known personality in New York, even before recording with Willie Colon and the Fania All-Stars. He had his own TV show, which started in the late ’60s and went into the early ’70s. He had his own group, Los Cuatro Aces, and even recorded with the worldwide known Trio Los Panchos, including in one of the recordings with Eydie Gormé.

Innovation: The “Cuatro” in Salsa Music

When Willie Colon tagged Yomo Toro to participate in his 1st Christmas album, Yomo Toro took with him the “cuatro” instead of a guitar. The way he used the “cuatro” in the Salsa melodies, was a dramatic contrast to how a “tres” would have been played.

While the “tres” goes along and even marks the swing of the music, Yomo’s “cuatro” was a counter-rhythm in a way a counter-voice would do in a song. It provided additional melodic value to the songs. His rapid riffs were amazingly musical as well as fast, something he figured is a common preference of people who listen to string instruments. He was the best at this.

Yomo Toro’s “cuatro” style fitted so well with Willie Colon’s salsa music, that the album “Asalto Navideno” became a huge hit (one that would require a 2nd volume), and Willie Colon decided to keep Yomo as a permanent part of his band.

This also opened the doors for Yomo Toro to play with the Fania All-Stars. His “cuatro” solo on the hit song “Quitate Tu“, part of the historic “Fania All-Stars Live at the Cheetah” albums consolidated Yomo as an integral part of the Salsa movement of the early ’70s.

With the “cuatro” now introduced to a young generation in a brand new way (in Salsa music, instead of in “aguinaldos”, or “Nueva Trova”, or “seis chorreaos”, etc.) Yomo Toro brought a piece of Puerto Rican culture to a generation that may not have appreciated the instrument in its traditional musical formats. In that way, Yomo Toro helped to carry the culture banner to the younger generation of Puerto Ricans.

Yomo Toro; you will always be remembered! RIP.