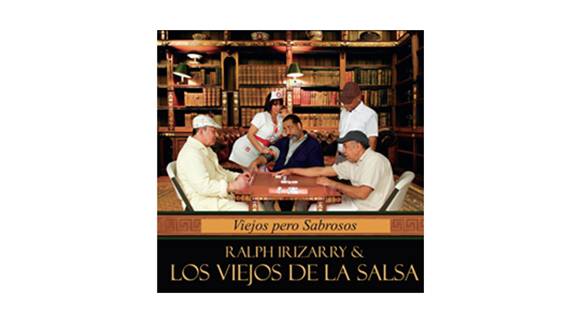 For Ralph Irizarry,who is ex-member of Ray Barretto’s band and Ruben Blades’ “Seis del Solar”, this is his 6th album as a bandleader (3 with Timalaye; 2 with Son Café; 1 with Los Viejos, if I’m keeping track correctly). This Salsa music project was partially financed through a Kickstarter project.

Themed around “los viejos”…but maybe too much! (keep reading below)

Some weak lyrics – some of the compositions were weak from a penmanship standpoint. Songs like “Al Tambor”, “Un Loco con una Moto”, and “Los Viejitos” are not all that lyrically strong. Marcial saves some of them with good “soneos” and the fact they are very danceable tracks, but still lyrically weak.

I liked “Viejos Pero Sabrosos” because it is a solid production by Ralph Irizarry that provides good “Salsa Dura” for dancers and hard Salsa music fans. Marcial Isturiz does a good job in front of the mike. The Venezuelan “sonero” provides good “soneos” and swing despite not having a gifted voice.

I hope that for the 2nd album of “Los Viejos de la Salsa” they go the way of the “Mambo Legends” and keep doing original “Salsa dura” music that does not reference the “viejos” themes so much. In the meantime, enjoy this great Salsa music work from Ralph Irizarry and his old buddies…and keep the good Salsa music coming!

Why Latin Jazz Was Reinstated in the Grammys