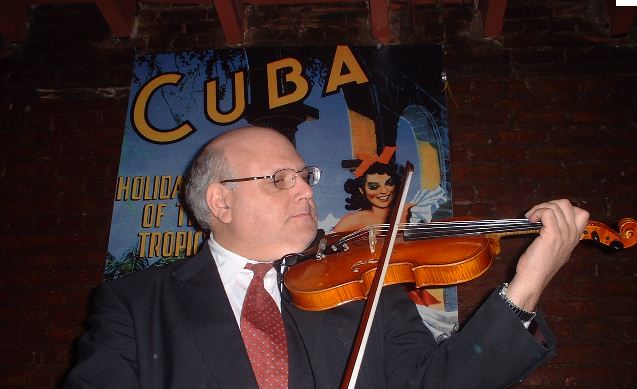 If you like Salsa music, it’s likely you’ve heard Lewis Kahn play, even if you don’t recognize his name.

This low-key, affable trombonist-violinist has played with some of the most recognized names in Salsa and Latin music, including Larry Harlow, Tito Puente, Eddie Palmieri, and Willie Colon among others.

I had the opportunity to talk to Mr. Lewis Kahn when I originally wrote this blog back in 2011. At the time, the maestro was part of the Juan Carlos Formell band, who were touring promoting their album “Johnny’s Dream Club”.

Mr. Lewis Kahn was incredibly humble and easy to talk to. I enjoyed every minute of my conversation with the man that I admired as a key component of the glory days of Orchestra Harlow.

So obviously one of my 1st questions was what attracted Lewis Kahn, this accomplished Salsa musician, to play with Juan Carlos Formell.

“It’s a fresh sound that is very melodic and romantic. It is something different from playing Salsa” said the soft-spoken trombonist, who also played several years with the Fania All Stars. “Juan Carlos’ music has structure, but it also allows space for improvisation. In that respect, it resembles jazz. It is very beautiful music”.

From Violin to Trombone, and Back

The musical career of Lewis Kahn began at a very early age, when he inherited the violin of his maternal grandfather. The young Lewis loved music and was classically educated on the instrument until he entered high school. “There was no violin in the high school band, so I had to pick another instrument. I picked the trombone because I liked the sound and I was big with long arms”, explains Mr. Kahn.

Lewis continued his musical education at New York’s Julliard School of Music. “Somehow my name got out to some of the Latin bands that needed a trombone player. I began playing in some boogaloo bands.”

Lewis Kahn began playing with Orchestra Harlow almost by chance. “Our band and Larry’s band were playing at the same event. In a break I began talking to Larry’s musicians, and I think to Larry as well. From there I was called to substitute for Harlow’s trombonists when there was a chance. Eventually, some of Larry’s musicians went on to do other things, and I officially entered the band.”

Lewis entered Orchestra Harlow, one of the key bands for the then new Latin music record label Fania. This was around the time of Harlow’s albums “Me and My Monkey” and “Electric Harlow” which were released in 1969.

I had to ask Lewis Kahn about one of my favorite Salsa music albums of all-time; the 1973 Orchestra Harlow album simply titled “Salsa”.

I thought this was one of the most progressive albums of the time, and still think it’s one of the best recorded Salsa albums. Like most of Harlow’s music, it’s based on the traditional Cuban music greatly influenced by the Arsenio Rodriguez sound, but yet, the orchestrations made the band sound bigger, almost ahead of its time. “Larry’s music seems to be always ahead of its time” was Lewis’ response.

“It wasn’t planned. In my mind I’m a trombonist, but I must have slipped and mentioned that I also play the violin, and Larry immediately wanted to try it in the band”.

Lewis Kahn was featured doing a violin solo in Salsa’s 1st singles hit “La Cartera”, but also plays the violin prominently in the classic Cuban “charanga” and hit “El Paso de la Encarnacion”. He also plays it in the melodic montuno “Silencio”, which makes my hairs stand every time I listen to it. Larry’s experiment using Lewis’ violin was a smashing success, and the violin has accompanied Lewis ever since.

Lewis Kahn also worked with Salsa and Latin Jazz bandleader and pianist Eddie Palmieri, “The Mambo King” Tito Puente, as well as with Salsa pioneer Willie Colon. “I went into Palmieri’s band to fill in for Barry Rogers who left to form a jazz-rock-fusion band.”

Considered one of the best Latin music trombonists of all-time, Barry Rogers had been with Palmieri’s band “La Perfecta” since the start in 1960. Lewis Kahn had the chance to collaborate with Rogers as part of the Fania All-Stars.

“Barry was one of the best trombonists I ever met. He had a rich full sound, which was very powerful. He certainly influenced the way I play” said Kahn.

The music scene is not as active as the Salsa scene was in the 1970’s to 1990’s. “It’s very different now because there isn’t as much work” comments Lewis Kahn.

However, Lewis stays busy as part of the Mambo Legends Orchestra (who’s excellent album “Watch Out; Ten Cuidao” I reviewed HERE), with Larry Harlow’s Latin Legends band, an occasional performance with the Fania All Stars, and has now several years of involvement with Juan Carlos Formell.

“I like playing with Juan Carlos. It has been a great experience and for me it’s a change of pace. The music is nothing like Salsa, although it keeps some Afro-Cuban roots in it.”

Lewis Kahn passed away February 19, 2019. I’m grateful to have met and talked with this “blue collar” Salsa man, who left his mark in Latin music with his unique talents.

Another album that really make me remember Lewis Kahn is Willie Colon & Ruben Blades “Canciones del Solar de los Aburridos”. His great play is evident in songs like “Te Estan Buscando” and the Samba-infused “Y Deja”, where he does a violin solo.

Its safe to say that Lewis will be missed by the Salsa fans of those glory years of the genre.