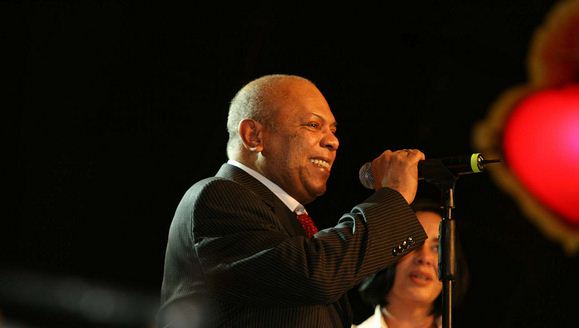 When I hear the words Colombia and Salsa together, there are two names that come to mind: 1. Grupo Niche, and 2. Joe Arroyo.

My Experience with Joe Arroyo’s Music

The first and only time I saw in person the recently departed Latin music great Joe Arroyo, was almost by accident in the late 1980’s in a party the night before the Miami “Calle 8” Festival. I went to the party because the main attraction was Nicaraguan Salsa music star Luis Enrique, who had recently released the album “Mi Mundo” and was all over the top of the Salsa music charts. I wanted to see what Luis Enrique sounded like “live”.

To my surprise, Joe Arroyo seemed to have more fans at the party than Luis Enrique. Everybody knew his songs, and when he sang “Rebelion”, the big legion of Colombians in the audience went crazy! I had heard “Rebelion” in the Tampa-Florida Latin discotheques, but this was the 1st time I heard and saw Joe Arroyo in-person. (you can read my blog on “Rebelion” HERE)

Joe Arroyo had a very distinctive sound, and was a bit hard for me to adapt my dancing to how the Colombians danced to his music, which was baptized “Joeson”. How many musicians you know that create their own music genre?

Fast forward many years, from the late 1980’s to the 2000’s. I got more familiar with Joe’s music through a Colombian friend here in the Seattle area. The man is a true Latin music fan, having DJ’d during his early college days as a part-time gig. He loves Joe Arroyo’s music, and through him I got to listen and learn about this Colombian artist.

Joe Arroyo: His Legacy for Colombian and Latin Music

“Joeson” was the result of the evolution of the sound of Joe Arroyo’s band, by combining Salsa, Cumbia, Socca, Reggae, and African rhythms. Colombians loved Joe’s music, and the rest of Latin America started to take note with the huge popularity of “Rebelion”. Joe was already popular in Colombia through various hits he accumulated with other bands before creating his own band “La Verdad”.

His most popular hits during this time were as part of the popular Fruko y Sus Tesos. Colombians loved the “Joeson” and Joe became a household name in discos and festivals everywhere in Colombia and wherever there were congregations of Colombians, like in Florida.

Joe’s music was vibrant with energy and he sang it with a high pitch voice. The high energy music and Joe’s singing made for a distinctive music that moved your feet even if trying to stand still. Joe’s band “La Verdad” distinguished itself through the blend of musical genres rather than by overly talented musicians or soloists.

Colombians grew to love Joe Arroyo’s music and lyrics, which regularly touched regional Colombian themes, as well exemplified by the Joe Arroyo hit “En Barranquilla Me Quedo”, where coincidently, he will rest forever.

“El Joe”, as he was affectionately know in Colombia and elsewhere, won numerous awards in Colombia, including 8 “Congos de Oro” and even had an award made especially for him, the “Super Congo de Oro” which was awarded to him twice. He was also honored with being “king” of festivals all around Colombia.

With Joe’s death, I’m inspired to examine more closely his music and hope that his musical legacy inspires young Colombians to emulate his originality and creativity.

A Market for Hybrid Concerts