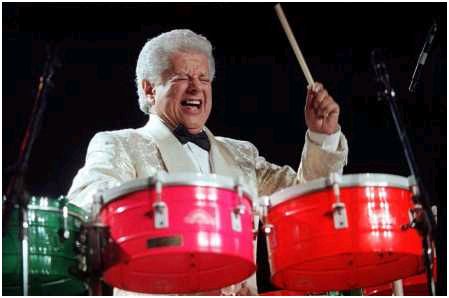 It has been 11 years since Latin music great Tito Puente departed, and yet it seems as if he was still here among us.

I just reviewed 2 recent Latin music CD releases which have Tito Puente’s direct influence. There is also a recent book on him, and just today, a Wall Street Journal article on the “Mambo King”.

The two CDs I recently reviews are diametrically opposite to each other, yet both draw on the work of maestro Puente. Bobby Sanabria’s “Tito Puente Masterworks Live” is a Latin Jazz album which revisits the sophisticated and broad talent Tito Puente brought to this genre. Maestro Sanabria pulled 13 songs that pay homage to Puente’s Latin Jazz work.

This album differs from Bobby Sanabria’s work in that its in a different genre (Salsa), and in that it does not include Tito Puente’s songs. The influence from Maestro Puente comes from the big band musical arrangements used by the Mambo Legends. Musical director Jose Madera, who spend many years with Tito Puente, made arrangements that make you believe you are truly listening to Tito Puente’s band. The songs may be new, but the band sounds just like Puente’s, with that rich big band sound of the Palladium in the 1950’s.

Joe Conzo Sr.’s recent book on Tito Puente, “Mambo Diablo: My Journey with Tito Puente” (2010) relates with great detail many behind the scenes stories of the musical career of this Latin music legend. I have not read the book, but it has received great reviews.

Today’s Wall Street Journal’s article on Tito Puente, “Long Live the Mambo King”, brings to the forefront the stories of Bobby Sanabria and Joe Conzo to remember the great Maestro of Latin music. One thing the article did not mention was the fact that Tito Puente was one of 5 Latin Music legends to have been honored last year with a United States Postal Service commemorative stamp.

However the article does end with a very appropriate quote from Afro-Cuban Jazz pioneer Mario Bauza, who is quoted as once saying, “”no one ever did more for Afro-Cuban music than Tito, and he isn’t even Cuban.”

The late Maestro Tito Puente left us a legacy that bridges music genres, countries, and cultures. He influenced Latin music so much, that we are still getting new forms of his music today, and these new Latin music albums will carry Tito Puente’s legacy to yet more generations of Latin music fans.

I join Bobby Sanabria in the way he ends his CD by yelling…”QUE VIVA TITO PUENTE!”