The Legend of Roberto Roena: Part 1 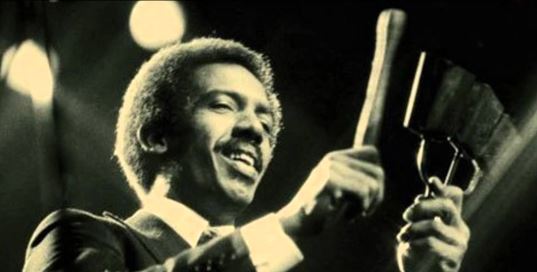 I had the fortune to witness the peak years of legendary Puerto Rican bongo player Roberto Roena. His Apollo Sound of the ’70s and ’80s made a profound impact on Salsa music.

One of my highlights regarding Roberto Roena was a concert he performed at our High School. The theme for the concert was Roena’s musical history. He played songs that covered from his first Apollo Sound album through his latest. At that time, the latest album was “La 8va Maravilla”. The Apollo Sound was at its peak, and Roena drove in on one of those long Cadillacs. The Cadillac reflected the success Roberto Roena had achieved in those years.

In 2010 Roberto Roena was honored, along with fellow Puerto Rican musician Luis “Perico” Ortiz, in the “Fiestas de la Calle San Sebastian”. The honor coincided with Roena’s 70th birthday, which provides a great milestone for us to look back at the career of this Puerto Rican musical legend.

Roberto Roena was a highly influential figure in Salsa music. The skinny kid that started his career as a prolific dancer, became the bongo player of one of the most prominent bands of the time in Puerto Rico.

Additionally, Roberto Roena revolutionized the choreographic movements singers do in front of Salsa bands. Finally, he lead one of the hottest groups during the peak of Salsa during the ’70s and ’80s.

From Cortijo’s Combo to Salsa Legend

I remember being in my grandmother’s house as a preschooler and watching with her the “Show de las 12” TV show, where El Gran Combo performed. I was mesmerized by the music and the dance routines Pellín Rodríguez, Andy Montañez, and Roberto Roena performed.

Although this was about the time period when I first saw them, Roberto Roena had been choreographing dances for some time with El Gran Combo,, and previously with Cortijo y su Combo. Roena caught the eye of Cortijo at a TV show where he went to dance with his brother. Cortijo decided to add him to his Combo and make him a percussionist. Cortijo taught him how to play the bongo, and envisioned that Roberto Roena could dance in front of the combo with Ismael Rivera when playing the cowbell.

Note: you can read more about the history of El Gran Combo in the blog series which starts HERE.

It would take me many blogs to describe Roberto Roena’s musical career, so consider this a quick summary.

In 1962 Coritjo y su Combo broke up. After a drug bust returning from a trip that ended with Ismael Rivera in jail, some of the members decided to leave Cortijo y su Combo and form El Gran Combo. Roberto Roena, who offered his mother’s house for the meeting, decided to stay with Cortijo. Cortijo was in a sense his musical father and he didn’t want to abandon him in his hour of need.

However, when Cortijo later decided to relocate to New York due in part to the social stigma of the drug bust, Roena decided to stay in Puerto Rico and joined El Gran Combo. There he worked with singers Pellín Rodríguez and Andy Montañez in a different kind of choreography dancing in front.

The dance routines became such an attraction that they became part of what distinguished El Gran Combo. This was to such an extent that when in 1969 Roberto Roena left El Gran Combo to form his Apollo Sound, Ithier not only hired a replacement bongo player (Baby Serrano), but also a replacement choreographer (Mike Ramos).

The Launch of the Apollo Sound

In 1969 Roena took off with his Apollo Sound. The band name came from the coincidental fact that the Apollo 11 was launched the day of their 1st rehearsal. I had a high school friend that would jokingly call them the A-“pollo” Sound, using the Spanish double-L sound rather than the English single “L” sound.

Roberto teamed with El Gran Combo bandmate and Puerto Rican great trumpet player Elías Lopés, to form the band. Lopés was in charge of the musical aspects of the band, while Roena provided the leadership and showmanship.

His dancing showmanship with his brother as a kid was what got him the gig with Cortijo. This was also what helped make El Gran Combo distinctive. Therefore, Roberto planned to use this inherent ability to leap the Apollo Sound over the other bands of the time.

Here is a video of Roberto Roena telling the story of this part of his life in his own words.

Roberto Roena distinguished himself for his showmanship. He started his career as a dancer with his brother and his uncle, Aníbal Vázquez. Aníbal became one of the most respected professional dancers with his Mambo Aces during the golden years of the Palladium in New York.

When Rafael Cortijo spotted Roberto Roena dancing, he recruited him to give his band something more flashy that would make his band stand out in a different way. Since then, Roberto Roena understood that there is more to entertainment than just music.

Colored hair and the use of “go-go” girl dancers were just a few of Roena’s showmanship ideas. Elias Lopés kept improving the sound of the Apollo with each recording. By the time they reached the Apollo Sound 6 album, the band reached excellent sonority. However, Roena would keep working on his showmanship.

In order for you to get a taste of Roberto Roena’s dancing skills, here is a video of him and his uncle Aníbal Vázquez dancing to the music of “Coro Miyare”.

I realize that I may get carried away while writing about my Roberto Roena favorite music. So I’ll make that the focus of Part 2 of this topic on the legend of Roberto Roena. You can get to Part 2 at the link HERE.

The Legend of Roberto Roena – Part 2