In the music world is hard to find a better Father’s Day tribute than that of Cuban pianists Bebo and Chucho Valdés.

This father-son family was separated by Bebo’s move out of Cuba in 1960 shortly after Castro’s Revolution win in 1959. However, life would later bring them together. 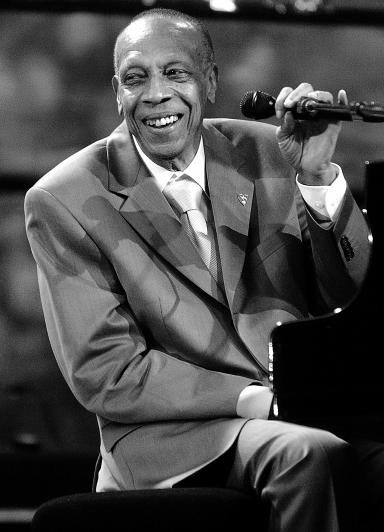 Bebo Valdés is a legendary artist and great patriarch of Cuban music. Born in 1918, Bebo performed with groups since the age of 13 to help sustain his family. Bebo Valdés continued to study music until completing his studies in Cuba’s Municipal Conservatory.

Keep in mind that at this point in history, Cuba had only a few rhythms to claim, mainly the Habanera, which is the original Cuban musical genre, then the danzon and danzonete, and bolero and the son, which were still emerging. It’s not until the 1930s and 1940s that Cuba’s musical variety really explodes.

While studying music, Bebo Valdés played in Cuba’s nightclubs, and later became the piano sidekick of famous Cuban vedette Rita Montaner. They performed at the legendary Tropicana Club. This relationship served as the inspiration for the animated movie “Chico & Rita”.

The Tropicana, the Mambo and “Chico & Rita”

From there, Bebo Valdés became the Tropicana’s house bandleader and arranger. As such, he accompanied various famous singers such as Benny More and Pio Leyva. With the frequent visit to Cuba of U.S. musical bands, Bebo quickly developed a love for Jazz. He became a pioneer of Cuban Jazz. He still found time to come up with new rhythms, including the “batanga” which competed with Perez Prado’s “mambo”, but never reached the same level of fame.

Actually, the story has it that Bebo Valdés participated in the experiments of Israel “Cachao” Lopez and his brother Orlando Lopez in the Lopez Brothers orchestra. These musical experiments led to the development of the “mambo”.

Arsenio Rodriguez also claimed having invented the “mambo”, although he called his “Diablo” (devil). Perez Prado was the artist who made the mambo famous in Mexico’s big market. He would later ignite the mambo craze in the United States and internationally. Although not the inventor, Perez Prado is the artist most people associate with the “mambo”.

Bebo Valdés left Cuba in 1960, separating from his wife and 5 kids, one of which was Chucho Valdés. Chucho was 19 at the time. Bebo established himself in Mexico briefly before joining the Lecuona Cuban Boys orchestra in Spain. The separation proved fatal for the relationship with his son, as they did not speak to each other for many years.

Bebo began touring Europe with the Lecuona Cuban Boys. In one of the stops in Stockholm, he met and married his second wife, and stayed living there. He started a new family and eventually moved to Malaga, Spain in 2008.

Chucho Valdés: a prodigy on his own right

Chucho Valdés was born in 1941, the 1st of Bebo’s 5 children with his wife Pilar. Chucho followed his father’s steps and quickly became one of Cuba’s premier jazz piano players. In that category, he joined the prodigious Gonzalo Rubalcaba, also a son of a famous piano player.

At age 31, Chucho Valdés formed one of Cuba’s most distinguished Afro-Cuban bands; Irakere. Many distinguished Latin Jazz musicians came out of Irakere. These include the talented saxophone player Paquito D’Rivera and trumpet virtuoso Arturo Sandoval. Both Paquito and Arturo launched successful solo careers in the US.

According to Paquito D’Rivera in his autobiography “My Sax Live” (“Mi Vida Saxual”), Irakere was really another attempt by this group of friends to create a jazz band under Cuba’s revolutionary government. The Castro brothers had banned Jazz as American imperialist music. The addition of the “afro” elements in the percussion gave it the necessary camouflage for the Jazz friends to practice their beloved music.

Chucho Valdés has traveled the world with Irakere, but unlike his famous Irakere alumni, Chucho has opted to continue to live in Cuba with his family.

With time, father and son forgot old differences and re-started their relationship. Bebo Valdés and Chucho first met in person after many years, for a documentary called “Calle 54”. For that documentary they recorded an impromptu piano session, each playing the piano in front of the other.

The video of that magical moment captures the beautiful song as well as the emotion of father and son, playing together and letting the emotions of their reunion flow through the piano keys.

From that reunion in the “Calle 54” film, the idea was born to make a recording together. That idea finally became reality with “Juntos Para Siempre” (for always together), in which the record in the same format of just using the 2 pianos.

The CD is a beautiful collection of mostly classic Latin and jazz songs, in which father and son take turns having fun at the piano. It’s a joy to listen.

I also recommend the CD “El Arte del Sabor”, where Bebo Valdés plays with Israel “Cachao” Lopez and Carlos “Patato” Valdés. This is another must-have for Latin Jazz enthusiasts.

I wish you a wonderful Father’s Day!